Defeat the EFCA and Card-Check 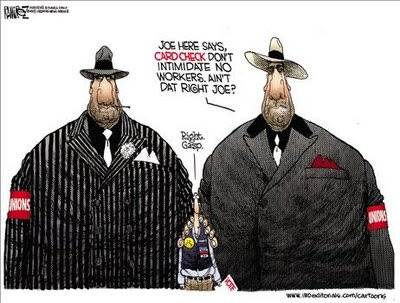 Still looming on the legislative horizon is something deceptively called the Employee Free Choice Act (EFCA, H.R. 800), the provisions of which will make it easier for union organizers to impose union representation on a group of workers by circumventing the current secret ballot method of deciding for or against union representation with an odious mechanism called “card check.”

Secret ballot voting has been a feature in US elections for more than two centuries, and that includes union elections. However, if the EFCA were to become law, the federal government will have tilted the playing field toward labor unions by giving them a tremendous advantage in the effort to organize workplaces.

Unions arose in the US more than a hundred years ago in response to issues in the workplace, but those issues no longer exist, due to an effective set of labor laws that have been enacted through the years that regulate the workplace and how employers deal with employees. Of course, if workers want some organization to represent them they certainly have that right, but the steady decline in union membership over recent years reflects workers’ comfort with the effectiveness of labor laws in satisfying their needs.

The most persuasive factor against the pro-union EFCA, however, is that labor unions produce negative rather than positive results for the economy and society at large.

There are 22 states, mostly in the south, which have right to work laws that allow workers to opt out of joining a union, even if there is union representation where they work. In non-right to work states, primarily in the north, if the business is unionized, all workers must belong to the union to work there. Right to work states have fewer unionized companies, because employees generally see no need to belong to a union and to pay expensive dues each year.

The National Legal and Policy Center and The John M. Olin Institute for Employment Practice and Policy issued a report titled "Do Unions Help the Economy? The Economic Effects of Labor Unions Revisited," which states that studies that have looked at the impacts of proposed card check feature of the EFCA legislation have found:
• Real GDP was depressed by about $3.5 trillion dollars from 1947 to 2000 due to unions. If you added the decrease in real wages paid to employees, the total impact rises to more than $50 trillion.
• One study found that union-produced "deadweight" loss to the US economy of 0.91% of GDP in 1980 fell to 0.34% of GDP in 2000 as union membership declined.

AFP further states that right to work states have had significantly more population growth than union shop states since 1990, seeing “on average, a 65.5% increase in population over the 16-year period while states with union shops laws only experienced an average of a 45% increase.” Right to work states also have experienced a higher level of growth, AFP notes, as businesses move their operations to states that promote a friendly environment.

Proponents of the EFCA boast that union workers are paid higher wages than their non-union colleagues, but this contention fails the truth test. Workers in right to work states saw an average 23 percent increase while union shop states wages increased only 15 percent on average.

"Right to work laws make unions more accountable to their rank and file," said Paul Kersey, director of labor policy for the Mackinac Center. "When you make unions more accountable to workers, you make a state more attractive to employers. A right-to-work law by itself doesn't guarantee prosperity, but it does seem to help. Allowing workers to decide for themselves whether or not to support a union does attract job-creating businesses, making work easier to find. These numbers bear that out."

Unions may serve a useful purpose in select circumstances, but the evidence heavily supports right to work laws and keeping the workplace open and free, allowing employees to make a decision about joining a union based upon their own personal situation and desires, and without the coercion that will exist if the EFCA becomes law.

That will not only benefit workers, but the economy of individual states and the nation.