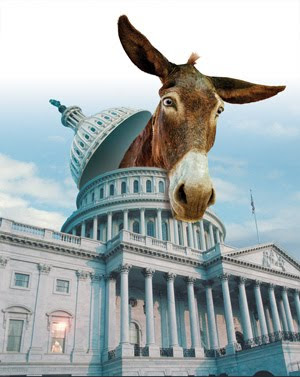 Observing the spectacle in the U.S. Senate the last couple of weeks, and particularly last weekend, has really highlighted the confusion and desperation gripping the leadership in the U.S. Senate. The manic effort to push through a (so-called) health care reform bill is truly remarkable, and Senate Majority Leader Harry Reid is going to extraordinary lengths to make sure some sort of bill is passed before Christmas.

Millions of Americans, watching in astonishment as this tawdry episode unfolds, want to know, “What’s the hurry?” It’s not as if there is an urgent need for health care reform – the situation simply isn’t critical, as evidenced by the fact that the helpful elements of the bill, such as they are, will not go into effect for years. Worse, there is little true reform in the bill. This is all about politics: an artificial deadline created to address an artificial crisis.

President Barack Obama campaigned on health care reform, among other things, and he’s set one deadline after another to accomplish this. The Congress has so far failed to respond to his demands, despite strong Democrat majorities in both Houses. So, it’s time to pass something -- anything.

Sen. Reid knows that if this bill isn’t passed before the recess, then when senators go home for the holidays, their New Years won’t be happy. Their constituents will be giving them an ear-full, and when they come back next year, some of them may have changed their minds.

Polls taken on and after December 10 plainly show that voters do not like health care reform as the Democrats envision it and support is insufficient to warrant even a vote on this bill, let alone this irrational effort to jam it down our throats in the waning days before the holiday recess:
NBC News/Wall Street Journal, 47 percent think it’s a bad idea, 32 percent think it’s a good idea;
Associated Press/GfK Roper: 44 percent oppose Congress’ plans, 36 percent support;
USA Today/Gallop: 43 percent would advise their member of Congress to vote against, 36 percent to vote for; ABC News/Washington Post: 53 percent disapprove of the way President Obama is handling health care reform, 44 percent approve.

Democrat leaders must think they are invincible. And why not: they have control of Congress and the White House. They believe they can do whatever they want, such as exclude Republicans from the legislative process, and pass legislation without regard for their constituent’s concerns and opposition, and everyone will be happy.

But the product this arrogant attitude produced is so objectionable that in addition to nearly all Republicans, it has alienated more than a few Democrats, and the effort to patch it up and make everyone happy is comical. Some don’t like the public option, while others insist on it. Some object to public financing of abortion, while others demand it. Some don’t like the degree of government control inherent in the concept, while others object to the exorbitant costs the bill will create, and the tax burden it will put on businesses and individuals. Some don’t like the cuts in Medicaid that will further punish doctors and hospitals, which already are paid less than the cost of the service they provide to Medicare patients. There’s something for nearly everyone to hate in this bill.

Sen. Reid could scrap this embarrassment and start over, seek actual bipartisan input and develop bills of modest size and scope that will actually address the problems in health care in a mature and responsible manner. But that idea apparently isn’t crazy enough for Sen. Reid. No, he prefers to stick to his guns, keep the controversial elements in the bill and buy off opponents with your tax dollars, or with minor changes to provisions of the bill that can then be undone during the compromise conference with the House.

Sen. Mary Landrieu (D-LA) changed her mind several days ago and agreed to support the bill. Her price was $300 million for Louisiana. Sen. Ben Nelson (D-NE), who had made a principled stand against the federal financing for abortion, has also been bought off. His price was a concession on the abortion feature and tens of millions in Medicaid funding that would pay Nebraska's Medicaid expansion bill forever.

With sweetheart deals like this, “The Price is Right” is the most popular game on Capitol Hill, and pretty soon other senators are going to figure this out. What kind of present is your state getting out of this?

This health care reform process is the most chaotic and incomprehensible mess in decades, or perhaps in America’s history. It features senators being called to work late at night, over the weekend in a blizzard; it’s a bill that nobody has seen as of last Friday that had hundreds of pages added to it on Saturday; it includes cuts to Medicare and other programs, and massive tax increases to accompany our double-digit unemployment.

“Brute-force central planning,” “the Edsel of health care plans,” “Let Me Call You Sweetheart” … however you want to describe it, this sordid process cannot yield good legislation. As they say in the data business, “garbage in, garbage out.”