Confused: Sen. Leahy has forgotten about
the U.S. Constitution 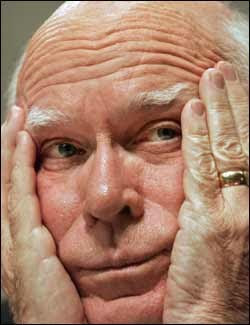 According to CNSNews.com, “Senate Judiciary Chairman Patrick Leahy (D-Vt.) would not say what part of the Constitution grants Congress the power to force every American to buy health insurance – as all of the health care overhaul bills currently do.”

That actually is not quite accurate: Leahy, who has been in office far too long to remember why he is there, could not say what part of the Constitution authorizes the unauthorizable.


CNS continues: “Leahy, whose committee is responsible for vetting Supreme Court nominees, was asked by CNSNews.com where in the Constitution Congress is specifically granted the authority to require that every American purchase health insurance. Leahy answered by saying that “nobody questions” Congress’ authority for such an action.

CNSNews.com: "Where, in your opinion, does the Constitution give specific authority for Congress to give an individual mandate for health insurance?"

Sen. Leahy: "We have plenty of authority. Are you saying there is no authority?"

Sen. Leahy: "Why would you say there is no authority? I mean, there’s no question there’s authority. Nobody questions that."

CNSNews.com tried a second time to get an answer, “Leahy compared the mandate to the government’s ability to set speed limits on interstate highways – before turning and walking away.”

CNSNews.com: "But where, I mean, which–"

Sen. Leahy: "Where do we have the authority to set speed limits on an interstate highway?

CNSNews.com: "The states do that."

Sen. Leahy: "No. The federal government does that on federal highways."