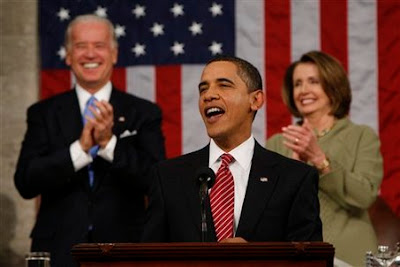 Those anticipating leadership and clarity from President Obama in last week’s address to Congress on health care reform were disappointed.

He could have shown us that he had at last started listening to what most Americans were telling him and the Congress to do, and outlined proposals to address the weaknesses of the current health care system, the one that provides the highest level of care in the world.


He could have endorsed several needed reforms, ones that Republicans support, which would change this Democrat crusade into a bi-partisan effort, changes like tort reform to lower malpractice and health insurance rates and the tendency of providers to prescribe procedures and tests that are needed only to protect them from predatory lawyers and their clients.

He could have said he would work with states to remove the barriers preventing insurers from offering their policies in all states, thereby increasing competition, improving policies, bringing premiums down and increasing the number of Americans with coverage.

He could have committed to reducing expensive and unnecessary regulation. And as someone who keeps telling us how wonderful government healthcare is and will be, he could have promised to get Medicare and Medicaid to pay their fair share to doctors and hospitals, eliminating shifting costs to insured patients.

He might have renounced the half-truths and outright distortions of fact he and fellow liberals have been using to scare people into accepting the idea of a single payer, government-run health care system that ultimately will result from his idea of reform.

He could have cited the actual number of people without health insurance, the number that omits the 12 million illegal aliens, as well as the millions with enough money to buy insurance but who voluntarily decline to, and those who are without coverage for three months or less; a number that is a mere fraction of the 46 million so frequently cited.

What we heard instead was more of the same tired rhetoric Mr. Obama has relied on to create the greatest divide in the American people we have seen in the last 40 or more years, on a subject that has frightened and angered those that oppose any additional government influence in how health care is provided in the country.

This time his speech threatening those who have the temerity to oppose him and his ideas was angrier and more petulant, accusing his critics of spreading "lies" and saying opponents want "to do nothing.”

It was the “All about Barack Hour,” “I” this, and “me” that – 68 times he said “I,” “my,” or “me.” “I will protect Medicare,” and “I am directing my Secretary of Health and Human Services … ,” and “I have no interest in putting insurance companies out of business ... I just want to hold them accountable.”

Mr. Obama continually said things that simply weren’t true, and that got the better of many in the House Chamber, who groaned and emitted other sounds of disapproval, including an unfortunate interjection by South Carolina Republican Congressman Joe Wilson, who screamed out “You lie!” after one of the president’s misstatements of fact. (Isn’t it curious that the House has had a rule in existence for a hundred years prohibiting members from calling any president a liar? Mr. Wilson is apparently not the first to have done so.)

However, crude as Mr. Wilson’s comment was, he wasn’t wrong on the facts. So how do we accurately characterize the president’s factual misstatements?

A lie is when someone deliberately passes on information known to be false. But sometimes people say things they don’t realize are false. They haven’t lied; they were just wrong.

There is an element of fantasy in Mr. Obama's statements on health care, including that we are going to save money by spending money; that we will solve our fiscal problems with a program that will increase the national debt by $1 trillion over a decade; and, that we will guarantee you can keep your current insurance by passing a bill that encourages your employer to stop offering it.

As the details of Mr. Obama’s Fantasyland ideas meet the light of day, he is losing support among his own party in Congress and among voters. His logical inconsistencies, implausible scenarios and the unacceptable possibility of another government takeover have generated protests by hundreds of thousands of unhappy Americans voluntarily participating in tea party rallies and a march in Washington last weekend.

Barack Obama is a smart man. He has an Ivy League education and he was a constitutional law professor.