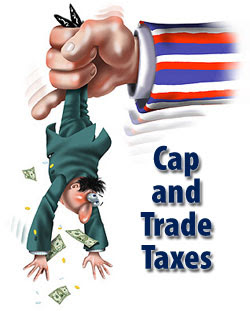 So the American people can breathe a sigh of relief if the traditional August recess is observed and members head home to check in with voters. While there, they will undoubtedly get an earful of the stuff they have been told in opinion polls, but have ignored. Recent news reports show this process is already taking place in town hall meetings.

The health care reform bill and the cap-and-trade bill now working their way through the Congress are the most dangerous legislative measures in memory. Alone, either of them spells big trouble, together, they spell catastrophe.

Are we about to see the greatest country in the world – the country with the greatest degree of personal freedom; the country established in opposition to the heavy hand of government; the country that has been the leader of the world for so many years – be transformed into a nation just like all of those that have followed along behind us, just one more nation that depends upon government to solve all its problems?

The odious Waxman-Markey cap-and-trade bill has as its underlying goal to move the US from burning pollution producing fossil fuels for their energy needs to a nation using non-polluting, renewable energy. Few will argue that we should not integrate “green” energy as soon as it’s practical. But we can’t do that for many years, because neither the nation’s infrastructure nor the technologies themselves are ready, and what’s more important, the environmental situation does not require measures nearly so drastic as the cap-and-trade bill will impose. Forcing this transformation will cause serious damage to our economy and our way of life.

Yet that is the goal of the energy initiative being pushed by the administration and the Congress, led by Waxman-Markey, and that was the focus of the Coal Summit held last week in the midst of the two Virginia’s coal country.

The economy of West Virginia and the southwest region of Virginia rely heavily on coal, with thousands of jobs depending upon the industry, either directly or indirectly.

Myron Ebell is Director of Energy and Global Warming Policy at the Competitive Enterprise Institute, and was one of the speakers at the Coal Summit. He reminded the audience of the realities of the US energy industry: eighty-five percent of its energy comes from coal, oil and natural gas; 50 percent of its electricity comes from coal, 20 percent from gas; and virtually all its transportation fuels come from petroleum.

Waxman-Markey requires that the US reduce its fossil fuel emissions by 17 percent below 2005 levels by the year 2020, and continue reductions so that by 2050 emissions will be just 83 percent of 2005 levels, he said.

Yet again liberals are mired in stage-one thinking, consumed by ideology and ignoring the practical obstacles that make what they want to do impossible in the short term, and difficult in the longer term.

One of those obstacles is the fact that alternatives aren’t close to being ready to supplant fossil fuels, and another is the spectacular inefficiencies of government. Mr. Ebell referred to news accounts of how surprised solar project backers have been at the delays in getting their project through the permitting process. Even projects that have the government’s blessing can’t move through the bureaucracy without encountering crippling amounts of red tape, one more reason to seriously doubt government’s ability to create workable solutions.

The current regulatory environment makes it difficult for coal companies to keep up with demand, he told the audience, and if it were not for the recession, with demand down as one result, parts of the US would be experiencing blackouts this summer. “That’s because the policies that created California’s blackouts are being exported to the rest of the country, and the culmination of that is the Waxman-Markey bill,” he said. One of the bill’s sponsors, Henry Waxman, is from Beverly Hills, and chairs the Energy and Commerce Committee, and the chair of the Environment and Public Works Committee, Barbara Boxer, is from Marin County. “They are exporting the policies that made California bankrupt to the rest of us.”

He painted a picture of attempts by the bill’s supporters to patch up the flaws and make deals to counter objections to the bill so that reluctant Congressmen would support it. He believes that Virginia 9th District Congressman Rick Boucher was involved in such a deal. The result is that instead of just the original bad bill, we now have a bad bill with pieces dangling from it held on with chewing gum and bailing wire.

Under the best of circumstances, energy prices and the price of everything associated with them will rise, and that will affect every American. Under the worst of circumstances we will experience economic catastrophe. “I don’t think the economy or coal can survive” this bill, Mr. Ebell said. Waxman-Markey cannot be successfully amended, he said, it must be defeated.

Each of us should contact our Representative and Senators, and tell them to vote down this bill.