What to do with Barack Obama? 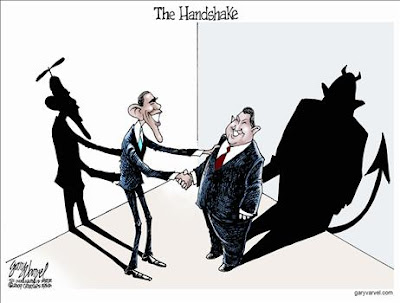 Try as I have to resist over-anxiously condemning Barack Obama’s every slip-up as a major gaff, and to cut the guy some slack, I am compelled to admit that after a little more than a hundred days in office our neophyte president has shown that he’s not up to the job, mounting up one failure and example of bad judgment after another. This is true even if you try to give the guy major benefit of the doubt while he tries to get his bearings.

There was that embarrassing series of botched nominees.

Then, he bowed to the King of Saudi Arabia.

The huge budget deficit and the absurd amount of stimulus that won’t stimulate.

Winning the war on terror by refusing to acknowledge it.

Inability to speak in public without a Teleprompter.

Laughing at tasteless and tacky jokes at the White House Correspondents dinner.

Realizing after solemnly pledging to do so that he really can’t close Gitmo, while tacitly admitting that George Bush was right to have the facility.

It’s really embarrassing; even some Democrats in the Congress are quietly whispering to each other in wonderment at the problems the new administration faces. And has caused.

However incompetent Barack Obama may be as President of the United States, the guy has to work somewhere, so here’s a thought: Let’s nominate him for Secretary General of the United Nations.

It’s a natural fit; they’re meant for each other.