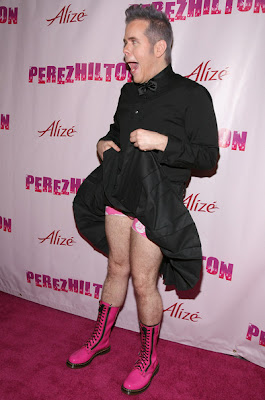 Okay, so a contestant in a beauty contest expressed an opinion that ran contrary to the opinion the judge that asked the question wanted to hear? So what?

The openly gay judge (shown at right), who is obviously an intolerant member of the “Tolerant Left” in the US, has unleashed an attack on the contestant out of all proportion to the comment she made.

Unable to mount an intelligent argument against the contestant’s opinion, the lefties have begun an all out attack against the young woman, in a vicious attempt to bring her down.

Juvenile behavior such as this is now a major characteristic of the political left, which has demonstrated its intellectual bankruptcy and its elementary school playground mentality over recent months, as its adherents become petulant and petty in the face of ideas they cannot logically defeat.

The idiotic response to the beauty contestant’s comment is only the latest of a long list of stupid and intolerant behavior by the “Tolerant Left.”

Message to liberals: Boys and girls, here in the United States we believe in and subscribe to the idea of freedom of thought and freedom of speech. We can think whatever we want, and we can express those ideas, no matter what you think. Grow up, and try to develop some substantive opposition to ideas that differ from yours, and quit being such a bunch of goofy, intolerant boobs.