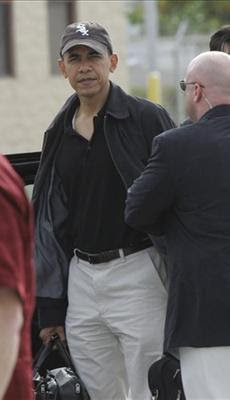 Continued sniper-like rocket attacks into Israel have finally pushed the Israelis to the breaking point, triggering retribution with an air attack against Hamas. The BBC reports:

Most of those killed were policemen in the Hamas militant movement, which controls Gaza, but women and children also died, the Gaza officials said.

About 700 others were wounded, as missiles struck security compounds and militant bases, the officials said.

Israeli PM Ehud Olmert said the operation "may take some time"- but he pledged to avoid a humanitarian crisis.

"It's not going to last a few days,'' he said in a televised statement, flanked by Israeli Defence Minister Ehud Barak and Foreign Minister Tzipi Livni.

Israel said it was responding to an escalation in rocket attacks from Gaza and would bomb "as long as necessary."

Tensions along the India/Pakistan border have heightened, as Pakistan redeploys thousands of troops there from the tribal areas near Afghanistan, raising tensions fired by the Mumbai terror attacks.

The move was expected to frustrate the United States, which has been pushing Pakistan to step up its fight against al-Qaida and Taliban militants near the Afghan border.

India has blamed Pakistani-based militants for last month's siege on its financial capital, which killed 164 people and has provoked an increasingly bitter war of words between nuclear-armed neighbors that have fought three wars in 60 years.

Afghanistan, the two officials said. They said elements of the army's 14th Infantry Division were being redeployed to the towns of Kasur and Sialkot, close to the Indian border.

The military began the troop movement Thursday and plans to shift a total of 20,000 soldiers, they said without providing a time frame.

Since both India and Pakistan have nuclear weapons; this situation could get tricky.

Just how Barack Obama will deal with these delicate and dangerous situations is, like Mr. Obama himself, a big question mark. Will he follow through on his pledge to sit down with foreign leaders, and if so, who will he talk to first? Will he continue America’s traditional defense of Israel? How will he respond to Pakistan’s abandoning efforts to stifle terrorist activity in favor of threatening India on the other side of the country?

Mr. Sowell is not apparently persuaded that these advisors understand the problems, or know how to deal with them. And his confidence in the President-to-Be isn’t much comfort, either: “Ronald Reagan had a vision of America. Barack Obama has a vision of Barack Obama,” he wrote.

It is situation like these that make it important that the President has demonstrated an ability to understand them and respond appropriately.

Barack Obama’s rhetorical abilities are useless against the problems in the Middle East. Let’s hope there are other tools in his bag that can be useful.