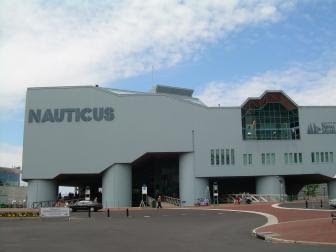 Thursday was an active day, even with the late start we’ve been getting all week. We got out around noon and went to lunch at Panera Bread, a really, really good sandwich place that has several locations here in the eastern US, and maybe elsewhere, too.

After that we made our way to Norfolk, Va., which is Navy central, with multiple bases in the area, the Norfolk Naval Station, the Norfolk Naval Shipyard, the Little Creek Amphibious Base, the Oceana Naval Air Station, all in the nearby area. There are other military installations here, as well, with three Army bases, and Langley Air Force base, close by.

Norfolk houses Nauticus, a nautical museum that features exhibits and information on area naval activities from the days before the Civil War. It’s a very interesting place, and has the battleship USS Wisconsin on display for touring. We spent more than an hour there before heading to the Virginia Beach boardwalk, which as I said before bears no resemblance to the boardwalk I remember from my Air Force days when my band spent so much time playing in the beach clubs (no remnant of which can be found today).

We then headed to Bella Monte, an Italian place recommended by my high school and college classmate Betty Todd Howes, whom I haven’t seen since 1966. She and her husband Peter, and the five of us had a good dinner and some long-overdue catching up. 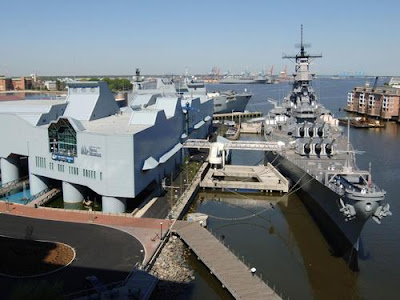 shanks in a dark sauce; Ryan had Lobster Ravioli, which he didn’t like; Katherine and Christen had something, but they were at the other end of the table and I don’t know what it was. Me, I had one of the specials, a split lobster tail with crab meat over risotto. This was the best dinner of the week. We got home about 10 p.m.

Friday, we are hoping and expecting to be able to go to the beach for a while without being sliced to ribbons by blowing sand, and the weather forecast give us hope that we can. Saturday morning will be glum, as we have to pack and hit the road for home.