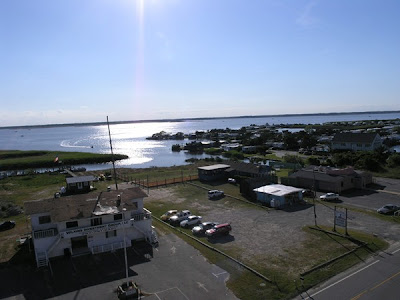 After that very busy few days last week we had scheduled a week away, and it may be the last one the four of us will have together, since the kids are getting to the point where they are headed in different directions than we are, and in different directions than each other. It is increasingly difficult to find something that the four of us all want to do that lasts more than a day at a time.

So, the four of us and Katherine’s friend Christen set out for Virginia Beach Saturday. That’s where I spent a lot of time playing in bands while I was stationed at Langley AFB a few years ago. Actually, it was about 40 years ago. Back then, Sandbridge was a deserted beach; today it is covered with beach houses and one big condo complex.

The trip down wasn’t too bad, until we got to I-64 south from Richmond. The traffic was pretty heavy, and the speed was up and down a lot, with no apparent cause, other than the inability of people to know how to drive on the Interstate. Then, we got to the Hampton Roads Bridge Tunnel, and that was a royal pain. It took about 45 minutes to go three miles to the HRBT, and another few minutes to get across/through the thing. But when we finally got to the destination on Sandpiper Road about an hour later, things were much better.

The place we are staying is fantastic. It’s belongs to a couple who already live nearby and bought this place, but haven’t been able to sell their home, and are renting this out until they can sell the house. The unit we are in faces the Back Bay rather than the ocean, but that is just fine.

After unloading the car and getting 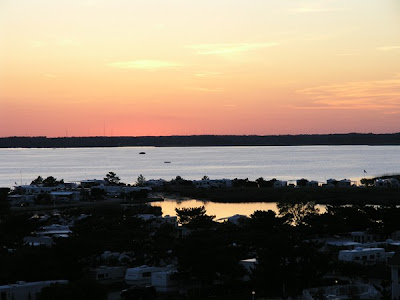 somewhat settled, we headed out to get some dinner and go to the grocery store. There was some information about a pizza place in the materials furnished with the condo, so we went there. D and I had a Portuguese Pizza, which was very good, with tomatoes, onion, peppers and garlic with an oil based white sauce. K and C had some kind of wrap, and Ryan had fish and chips. Made as quick a trip as possible so we could get back for the sunset, which was pretty much over by that time.

Diane and I were not too far from here not too long ago for a wedding, and we spent a little time looking around at the old haunts, but not enough. My goal: relax, and spend some time looking at the places where I spent four years of my life. Try to get on Langley, which we weren’t allowed to do last time; find the old apartment and house where I lived, which we did do last time, but didn’t have time to really get a good look; find the old places where we played; find an old schoolmate who lives here, and see if any of the guys in the bands are still here. I guess we’ll go to the beach today, if only to look at it. It’s still a little cool in the mornings—it’s about 65 now—and this afternoon promises only about 71.