Why Not John McCain? 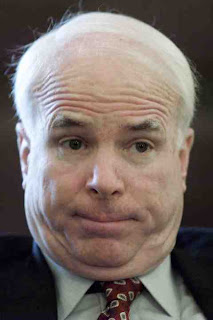 Being in Florida on this Primary Day might be expected to provide a little insight into what’s going to happen. It doesn’t. The only thing I’ve come across today that even remotely smacks of politics was a conversation overheard at lunch in Islamorada, where a guy who is a Democrat said he and his wife had thought seriously about changing parties because the Democrat Party has its panties in a wad because Florida moved its primary up in the year without permission, and the party essentially disenfranchised Florida Democrats who might vote today.

But the reality is for this conservative fellow (me) that none of the Democrats is a viable choice because of their liberal ideology, and the Republicans are less than desirable for some of the same reasons. So now that the real political season has dawned trying to find a person suitable to be President begins in earnest and every candidate remaining in the race on the Republican side has his own set of shortcomings. Some of the shortcomings affect the independent vote more than the conservative vote, but that is of little concern when you think about the true nature of electoral politics. Mike Huckabee’s religion is a weight around his neck more powerful than his sense of humor. Rudy Guilanni’s record as the mayor of New York gets him respect as an administrator and manager, but doesn’t overcome his positions on certain issues and the “stains” many perceive from his personal life. Mitt Romney gets negative points for being a Mormon, as if that is somehow worse than being just a plain old Christian, or a Catholic, or an atheist, and despite his pretty impressive record as a governor, and his enviable record in the private sector, he’ll have trouble with the independents.

John McCain has recently risen from the dead, and is a force to be reckoned with; prospects of him being the Republican nominee are all too real, and more than a little disconcerting. McCain has a few assets, among which is his service in the U.S. Navy and having been a stand-up guy during five years as a prisoner of war in Viet Nam. A guy with McCain’s background gets a lot of sympathy and hero support, but it doesn’t get him the nomination or the election. There’s a dark side to McCain that deserves as much attention as his war record and public service record, and it is strong enough to neutralize those assets, and in fact to overcome them. And it isn’t his age, as Chuck Norris charged. Norris is another of those Hollywood and entertainment figures who ought to keep his political opinions to himself.

McCain has two stains on his public service record that disqualify him as the Republican nominee, although they are not strong enough to prevent me from voting for him over Hillary Clinton or Barack Obama, and certainly John Edwards, whose continued participation in the race is nothing more than a power play. But that’s the subject for another day.

As every election season heats up we hear more and more about “reaching across the aisle for the good of all Americans,” the idea that compromise is the solution to our national problems. No doubt some issues can be resolved that way. But some positions cannot be compromised into solutions, and that is a lesson that John McCain either hasn’t learned, or has been willing to put aside for political expediency. One such folly is the the Bipartisan Campaign Reform Act of 2002 (BCRA, or the “McCain–Feingold Act”) a reach across the isle by McCain to the outstretched hand of Senator Russ Feingold (D-WI). The Act has high-minded intentions, which are to reduce the increased role of soft money in campaign financing by prohibiting national political party committees from raising or spending any funds not subject to federal limits, even for state and local races or issue discussion, and to control the proliferation of issue ads, by defining as "electioneering communications" broadcast ads that name a federal candidate within 30 days of a primary or caucus or 60 days of a general election, and prohibiting any such ad paid for by a corporation (including non-profit issue organizations such as Right to Life or the Environmental Defense Fund) or paid for by an unincorporated entity using any corporate or union funds.

And the problem with that is: The First Amendment. Our Founders were very concerned that Americans have the freedom to say pretty much what they please, and we can see today that many Americans avail themselves of that freedom in very explicit and ill-conceived ways. What the Founders were concerned about was protecting not just the right to criticize the latest movie or fashion trend, but to protect political speech, for without the right to criticize our government and our elected leaders, the United States is in the same boat as Iraq under Saddam Hussein, or other famous places where the boot of some dictator is firmly on the neck of the citizenry. John McCain co-authored a bill to limit political speech, and that creates substantial problems for many voters. I am one of them.

The second of McCain’s ill-advised ventures in bi-partisanship is his involvement with Connecticut Democrat Sen. Joe Lieberman, who joined forces in a feel-good measure to try to water down the harsh, unacceptable and disastrous terms of the Kyoto Protocols agreement to reduce carbon emissions. Kyoto’s aim is to reverse global warming by crippling mankind, or at least those of us in developed countries, under the fallacious guise that by reducing carbon emissions we can reverse global warming. We can’t, for the simple reason that manmade carbon emissions are not responsible for global warming, and even if Kyoto’s demands were met the reduction in greenhouse gases would be miniscule, and at the expense of billions of dollars in increased cost and great inconvenience to Americans. You might think that any effort to weaken Kyoto should be applauded, but merely weakening it, as McCain has twice attempted to do, is not nearly enough, and his efforts are nearly as dangerous as enacting Kyoto as written.

The depth of McCain’s failure to understand the “climate change” issue is breathtaking, and it is more than a little unsettling that someone who wants to be President of the United States would endorse a measure so dangerous to his own country. That tells me that one of two things is true: McCain doesn’t know the issue thoroughly; or he doesn’t care about the dirty details because pandering to the green lobby for political expedience is more important. I prefer to think it is the former, rather than the latter, but either way, John McCain isn’t “The Man.”