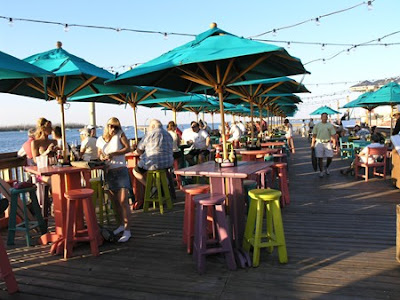 A lazy day reading, watching TV and lounging by the pool was the prescription for today. We finally made it out around 4 p.m. and hit the Publix market for a few items, and then went downtown for the sunset activities at Sunset Pier.

The Pier is a neat place, facing west at the point that a lot of the commercial boats head out and back in, and there was a lot of activity on the water in addition to the big boats. We found good table along the banister and right in front of the stage. Almost immediately two guitarists took the stage, creating a little concern that they might be loud and they might not 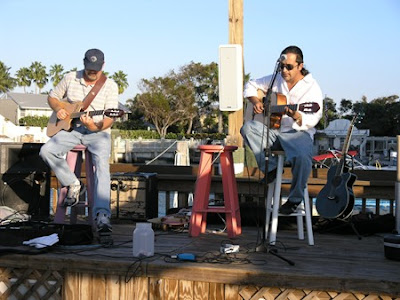 be very good. We shouldn’t have worried: they were just loud enough, and were fantastic. Their music was Latin, with both guys alternating playing guitar solos and rhythm over recorded bass and percussion tracks.

Their music was energetic and quite well done, and they played such things a “Hotel California,” “Volare,” “Spain,” some things by the Gypsy Kings and Santana, some music from Cuba, all with Latin and jazz influences. The guy on the right was Hispanic, and sang as well as he played guitar. If you are familiar with Chick Corea’s “Spain,” it has a challenging riff that eludes many players: these guys were quite a pleasant surprise.

We looked over the menu for a drink with our food and almost immediately decided against the Liquid Jelly Monkey Luv in favor of more conventional libations. We first had some chips with 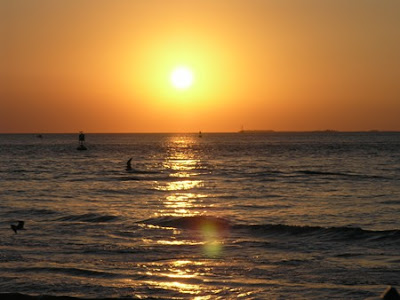 three dips: salsa, con queso and guacamole; Diane ordered a Cuban Mix sandwich and I had Crab and Lobster on a Croissant. Once again, my choice wasn’t all I had hoped or expected. The half of Diane’s sandwich that I had after downing my own was pretty good.

The Pier is not far from Mallory Square and other activities along the waterfront. We saw jugglers, acrobats, a one-man band, a guy with a dog that did tricks, a woman who swallowed a long balloon that ought to have choked her and other entertainers after the sunset dinner at the pier. After walking around the downtown for a while, we headed back and caught the end of the Republican debate. All in all, it was a good day.