Walking around the historic area of Key West revealed much more than we had imagined, based upon the first brief visit. The maps and visitor information told us about these places, of course, but only by visiting them do you really get a feel for the places. On that first visit we took a trolley tour that showed us some of the old town area, but there is so much more that we hadn’t seen.

It’s difficult to park close to where you want to go in Key West, and if you’re not careful, you can set yourself up for a lot more walking than you might really want to do. If you scope out places and plan a little, you can save both time and walking. We found a couple of areas that we want to spend some time at later in the week, trying to get a feel for where to try to park, since parking is such a problem.

Back in the 40s President Harry Truman came here on a vacation recommended by his doctor. 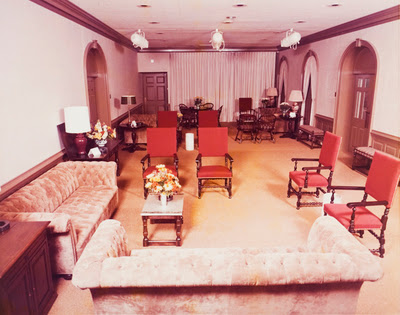 He stayed on the Naval base, in the commandants residence while no commandant was assigned, and liked it so well that he visited nine more times during his presidency. He is quoted as having said he’d like to move the White House here and just stay. The commandant’s house became Harry’s place, and became known as the “Little White House.” The Naval base is no more, and the Little White House is now an historic site. After lunch we visited the LWH.

We’ve been here since Saturday evening and I’ve only had seafood for one meal, the very first one, and it was fried shrimp. I’m a little disappointed in myself. We had a light breakfast in the apartment and headed downtown, finally deciding to visit the Historic Seaport area and had lunch at the Conch Republic Seafood Company, where I had a steak sandwich with peppers, onions and provolone on Cuban bread. It was pretty good, very big, and very messy. It wasn’t seafood. Diane had a mango pulled pork barbeque sandwich. She liked it.

It was an odd day, weather-wise. In the sunshine it was pretty warm, but in the shaded areas the sometimes stiff breeze made it a little chilly. We wondered around for a few hours looking at places, had a piece of Key lime pie, and headed back to the apartment around 5 p.m. No dinner tonight; we’re both still full from lunch and the pie. Just having a snack.

We’re both ticked off that the apartment’s Internet service is lousy and unreliable. It’s especially irritating because when we made the reservation we explained that having reliable Internet service was a necessity. Had we any indication that it wasn’t going to be, we’d have found a different place. I’m not shy about telling people when they screw up, but I really hate to have to do that.