At Long Last: A Trip 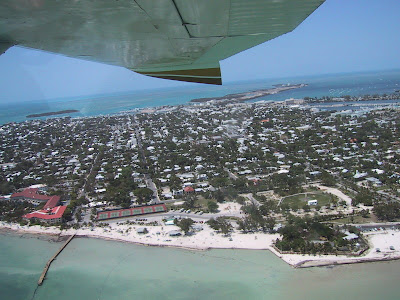 The first time we were in Key West was four years ago when we took a cruise to celebrate our son’s graduation from high school. It wasn’t the best experience, but overall a pretty good one, but we felt we needed to go back someday. So, we saved up and after a lot of commotion to get a Christmas trip to give each other, Diane and I booked a flight to Miami and rented a convertible to drive down US 1 to Key West.

We got to Miami International (for a really good price, thanks to Diane’s shopping expertise) about 3:15, and by the time we got to the rental place and got all that straightened out, we were in our Mustang convertible and heading out of Miami in an hour.

After about an hour of driving we had worked our way to US 1 south and escaped the mainland. It was a nice day, and after we got to the first and only drawbridge, we stopped and put the top down and continued south. We finally got to Key West and to the place we were going to stay about 7:40. The drive down was pretty nice, but long. Had we gotten to Miami a little earlier, I think the whole trip to the Keys would have been, on the whole, a better trip. But as time passed, darkness set in, and the trip began to drag out, since we didn’t have the magnificent scenery to keep us interested. Speed limits of 35 mph didn’t help.

Once we got checked in and to the apartment and unloaded everything and went out to get dinner, it was about 8 p.m. We ended up at a TGI Friday’s. It was loud and busy, but the food was good. Back to the apartment, and the day was done.

Sunday was a relaxed day, as all should be in KW. We headed to the historic part of the island about 10:30 a.m. with no plans, other than to spend some time looking around. Most of the stuff you read tells you to avoid Duval Street, because it is so “touristy.” But we hadn’t really gotten to see much of it before, and we ignored the advice. After walking around a while we ended up at Margaritaville, Jimmy Buffet’s place. We had been there on the first trip when the ship we were on docked there for a day. On the advice of some friends we had gone to Buffet’s place for a conch sandwich, which two of the four of us didn’t even consider. Ryan and I thought about it, and I actually ordered one, looking forward to a seafood treat. When the sandwich finally came, it had chicken between the bun halves, not conch. I was unhappy (gross understatement!).

This time, it turned out that a conch sandwich wasn’t even a possibility; it had been taken off the menu. Darn! So, I had a chicken club and Diane had a Cheeseburger in Paradise. That was her second one of those. We both had a margarita, and moved on. We walked around for a couple of hours, saw stuff we hadn’t seen before, bought some locally hand-rolled cigars, had dessert and a drink, visited Key West Winery and bought a bottle of Hurricane Class 5 white sangria (a very nice sweet wine), and had a great time. We headed back to the apartment about 4 p.m., and killed some time until we decided to go out to get dinner.

We hadn’t made any plans, so we just rode around looking for what we could find away from the busy historic area, but didn’t find anything that really rang our bells. Next thing we knew, we were back in the historic district which, among other things, is not friendly to people looking for a place to park. As it turned out, we had lucked into a free parking spot not more than a couple of blocks from Duvall Street earlier, so we went back there. As luck would have it we found another place at nearly the same place.

While we were riding around we saw a Thai restaurant that Diane was interested in, and it was only about a block away from the parking spot, so we went there. It’s just amazing how being only a block or two away from Duvall Street makes such a difference in foot traffic. As we drove down Duvall, we saw wall-to-wall people, standing in lines waiting to get into the places along the strip. At Thai Cuisine, on Greene Street two blocks away, we were seated immediately.

It was an international place: It was a Thai restaurant; an American girl seated us; a delightful Polish lass named Kasia waited on us; and a friendly Hispanic fellow bussed the table.

I haven’t had much experience with Thai food, but let me tell you that if you get to Key West, you should go to Thai Cuisine. Diane had a chicken panang curry dish (she likes curry) with coconut milk and ground peanuts, pea pods, carrots and green peppers. I had a honey roasted duck dish with carrots, pea pods, green peppers, onions and straw mushrooms with white rice. The food was terrific! And, it wasn’t very expensive, as Key West food goes. We got out of there with a $65 bill, including a bottle of wine. You’ve got to go there!

We walked around a little while, stopped in at Fogarty’s for a Mojito expertly made by Brandon, then headed home.

Day One was near an end.