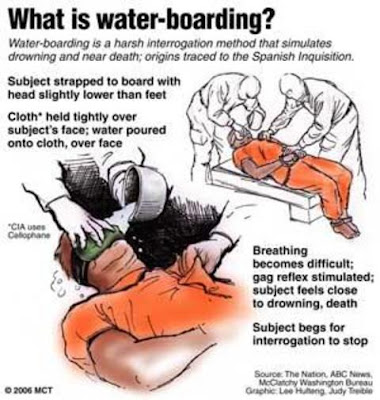 There is more hand-wringing about waterboarding, the aggressive interrogation technique that involves simulating drowning and often stimulates the interrogatee to talk. Some people consider this torture.

This issue is a divisive one, with strong opinions on both sides.

First of all, there is an active argument about just what constitutes "torture." The most ardent opponents of aggressive questioning likely would label playing loud music and depriving suspects of sleep as torture, and anything more strenuous, as well. To these people acceptable interrogation consists only of asking questions and hoping for helpful answers.

But we're not talking about Boy Scouts here, we're talking about terrorists bent on killing Americans, and it's just common sense that if you don't make terrorists uncomfortable, they will never divulge the critical information we must have; it is naïve in the extreme to expect them to have a change of heart just because they've been captured. So what do we expect our government agents and military people to do when they capture people who likely have critical information that may enable us to prevent the loss of American lives?

The antis use the term torture to describe every technique that their sensitive psyches cannot abide, and they say things like, "we are a better country than that," and "torture is always wrong," and "torture produces bad information."

All of those points have forceful contrary arguments.

The first thing that must be said is that many aggressive interrogation techniques fall far short of being torture, and a lot of people who know do not consider waterboarding torture. Even so, are we so "good" a country that we will wet our pants and willingly sacrifice fellow Americans over the possibility of taking the steps necessary to get the information we need to protect our country and our people from murderers? Are we so screwed up that we will risk the lives of our civilian and military personnel to capture terrorists, and then not aggressively question them to find out what they know? And by the way, aggressive interrogation techniques often produce positive results. Sure, suspects sometimes will say anything under torture techniques to make it stop, but sometimes they tell you what you want to know.

So it comes down to this: just because you sometimes hit a golf ball into the sand or miss a three-foot putt, do you stop playing the game? Of course not. And just because aggressive interrogation, or even real torture, sometimes fails to work, do you avoid using it to save lives when that is the only option?

A Democrat strategist argued on TV recently, "I'm a mother. You come after my kids and I'll use whatever I have. But I'm not the President of the US." So, according to the strategist, it is okay for a mother to torture someone to save her child, but the President can't use the same means to save hundreds or perhaps thousands of Americans? That strategist then said, "You can beat a child into submission, but that doesn't make it right." In addition to the magnificent lameness of that comparison, the statement is asinine on its face.

Here's the bottom line: If you have the opportunity to get information from someone that will save American lives, you damned well better do everything you can to get that information! Period.

And if that causes the hyper-sensitive namby-pambies to get their panties in a wad, so be it.