Justice Has Been Served?

Mike Nifong, the despicable Durham County, N.C., district attorney who was disbarred for his
prosecution/persecution of three Duke University lacrosse players last year on fallacious rape charges, was sentenced to one day behind bars for criminal contempt of court. Nifong could have been sentenced to 30 days in jail and a $500 fine. He was ordered to report to the Durham County jail next Friday at 9 a.m. 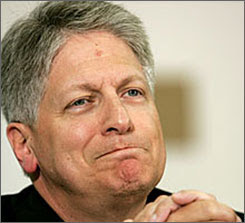 After a two-day hearing, the judge found that Nifong "willfully made false statements" to the court in September when he insisted he had given defense attorneys all results from a critical DNA test.

Duke University law professor Thomas Metzloff said the sentence was "unprecedented." "This just doesn't happen," he said. "This was a very important moment because it showed that the court system really cared about what happened in this case."

Here we have an elected official, charged with upholding the law in the county he served as district attorney, who misused his power by manufacturing a case that would attract national attention and help him win reelection, trashing the lives of three college students and their families in the process, and he gets just one day in jail? And he doesn’t have to report until next week?

Even the maximum sentence of 30 days and a $500 fine is insufficient in this case. After all, how much more egregious could Nifong have been in his malfeasance?

If the judge really cared about what happened in this case, as the professor believes, he would have thrown the book at Nifong, and given him the maximum sentence for every infringement he could think of. And, he would have had Nifong stripped of his business suit, dressed in an orange jump suit, hand cuffed and led to jail immediately. That would have been unprecedented, and it would have been a powerful statement, warning others who might want to follow Nifong down the path of abuse of power.

Justice in this case is not only blind, it is stupid.