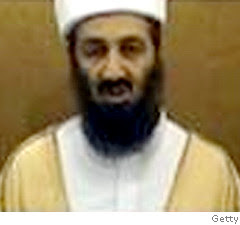 Six years after the 9-11 attacks Osama bin Laden is in the news again, and everyone is paying attention to him and the video that it supposedly heralds. Does it signal a potential new attack? Will it contain some hidden coded message that will direct Islamic whackos to unleash murder and mayhem against the US, perhaps inside our borders? Is it just an effort by the whackos to get everyone all upset?

An interesting new element in the hype surrounding this new video is a photo of bin Laden showing his beard both shorter and darker than in the last “Dial ‘ObL’ for Murder” production, which experts have offered different opinions about, including that the photo has been “PhotoShopped,” that it is an Arabic/Islamic trait to darken beards (which I seriously doubt), and other similar things.

Of course, no one knows what the video means until it is released, and we may not know very much after it is released. Even so, among the residue of the bin Laden resurfacing is new criticism of the Bush administration for not having caught or killed the murderous coward. It should surprise no one that renewed criticism of Mr. Bush has arisen; the manic Left and juvenile Democrats criticize him for doing something, not doing something and even for continuing to draw breath. But the issue of whether bin Laden should have been caught or killed warrants re-examination.

Many, if not most, Americans believe that the US military is the best in the world, and when it suits their purposes, even Democrats and liberals make this claim. Now is one of those times. “Bush should have stayed out of Iraq and focused on the war in Afghanistan and hunting for bin Laden,” is one frequent comment. The clear implication, of course, is that our military and our intelligence apparatus (frequently the butt of criticism) would definitely be able to accomplish this task. “How can we have failed to find a six-four, four-inch Arab in an area of the world where men mostly grow to far less than six feet in height?” is another.

Perhaps a more determined effort might have captured him, and perhaps it is a legitimate criticism of the President that we haven’t caught him. But we need to think about a couple of things while we are considering how to feel about this situation. First, maybe it isn’t as easy to find one person hiding in the mountainous terrain along the Afghanistan/Pakistan border, who is a local hero fiercely protected by his own entourage and the local tribes, as critics like to think it is. And maybe, as President Bush said a couple of years ago, finding bin Laden isn’t the most important focus for our attention.

Is bin Laden really the “brass ring,” the “blue-ribbon trophy,” the most important target for America? Or is he merely the evil symbol of radical fanatic dolts who believe Allah really told them through Muhammad that they have the duty to conquer or kill those who believe otherwise? Is bin Laden even still alive?