The Debate is Over 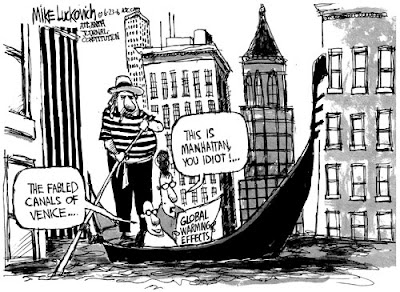 Well, if we are to believe NBC Nightly News, it is a “done deal” on the matter of human effects on global warming. Anchor Brian Williams and the NBC reporter on this story have concluded that there is no longer any doubt that the activities of human beings have a significant negative effect on our environment. The only question as yet unanswered, according to NBC News, is to what degree is man destroying his environment?

However, contrary to Mr. Williams’ and the reporter’s opinion, there are a substantial number of credible scientists who do not agree that mankind’s activities have any measurable effect whatsoever on the earth’s atmosphere, and others doubt that the effect of humans is detrimental to the environment.

But let’s give NBC News the benefit of the doubt: perhaps mankind really is affecting his environment through his activities. Even under that assumption, where NBC News went wrong is in “concluding” that there is no longer any question about man’s affects on the environment. It is not NBC News’ job to conclude anything about whether or not mankind is negatively affecting his environment, it is NBC News’ job to tell us what scientist A—a proponent of the man causes global warming theory—thinks, and tell us what scientist B—who does not agree that man affects his environment—thinks, and let us decide which of them is correct.

But NBC is not the only journalistic organ that has acted badly on the topic of global warming. Robert J. Samuelson, a contributing editor at Newsweek magazine, has sharply criticized his own publication for what he calls a "highly contrived” cover story about the global warming threat and what the magazine terms the "denial machine” that disagrees with it.

Says Samuelson: "As we debate it, journalists should resist the temptation to portray global warming as a morality tale–as Newsweek did–in which anyone who questions its gravity or proposed solutions may be ridiculed as a fool, a crank or an industry stooge.” And, "unfortunately, self-righteous indignation can undermine good journalism. Last week’s Newsweek cover story on global warming is a sobering reminder. It’s an object lesson of how viewing the world as ‘good guys vs. bad guys’ can lead to a vast oversimplification of a messy story.”

According to Samuelson, the Newsweek cover story is a "well-coordinated, well-funded campaign by contrarian scientists, free-market think tanks and industry [that] has created a paralyzing fog of doubt around climate chance. This ‘denial machine’ has obstructed action against global warming ... The story’s thrust: discredit the ‘denial machine,’ and the country can start the serious business of fighting global warming.”