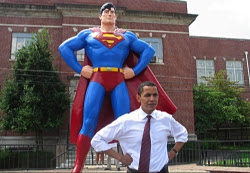 Democrats like Sen. Barack Obama (D-IL) say immigration reform is a divisive issue, but contend that lawmakers should work collectively to assist immigrants living in the U.S. Sen. Obama recently addressed the annual meeting of the National Council of La Raza, a Hispanic organization, and talked about realities at home, remarks that got little public attention. Regarding the population of illegals in our country today, the Illinois Senator assured the crowd that "I will never walk away from the 12 million undocumented immigrants ..." There seems to be a disconnect on the part of Senator Obama. He apparently does not understand that the President of the United States is not charged with the responsibility of looking out for illegal immigrants, let alone making it a campaign promise.

Mr. Obama apparently sees these folks as immigrants, not as the lawbreakers that they are, and for a Harvard-trained lawyer that is a curious misapplication of judicial reasoning. To Barack Obama they are just "undocumented immigrants," people whose papers are simply not in order. Is this a serious problem for a presidential candidate? Well, yes, it is a huge problem for a presidential candidate. The President of the United States takes an oath to preserve, protect and defend the constitution of the United States, and that includes providing for the common defense, promoting the general welfare and securing the blessings of liberty to “ourselves” and our prosperity. Notice that there is nothing there for persons who enter our country illegally.

And, as if that is not enough, in an address before an audience of about 2000 members of the National Council of La Rasa, Senator Obama compared last year’s massive immigration rallies held by Hispanics to the civil rights marches of blacks in the 1960s.

Before, the rub against Barack Obama was that he didn’t say anything of substance. Now, the rub is that the substance of his remarks is unacceptable in a President of the United States.