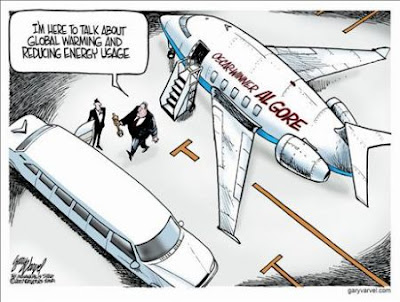 When you cook, travel, bathe, heat your home and a long list of everyday activities, you are contributing to the pollution of the atmosphere, we are told by the environmentalist nannies. Dumping leftovers from burning carbon-based fuels heats up Earth’s atmosphere to dangerous levels, and promises to unleash untold horrible future catastrophes that will make the planet uninhabitable.

If we accept this theory as fact, then what we ought to do is to stop burning carbon-based fuels as soon as possible; no more oil, gasoline or diesel; no more wood or coal; no more natural gas, et al. And, even though it doesn’t produce greenhouse gases like the foregoing sources do, no more nuclear, either. We should focus our intellect and money on developing non-polluting forms of energy such as wind, solar and hydropower.

And proponents of non-polluting energy sources, and opponents of fossil fuels and other pollution-causing forms of energy, should lead by example. Such climate experts as Sheryl Crowe, Madonna, Melissa Etheridge, Sting, Snoop Dog, and Al Gore, tell us how critical it is to stop dumping greenhouse gases into the atmosphere as they live in their mansions and flit about the globe in their private jets “spreading the gospel” to the infidels who don’t want to abandon their lifestyle on the say-so of mere celebrities and an unsuccessful presidential candidate. By way of example, Gore’s Tennessee home devoured nearly 221,000 kWh in a single year—more than 20 times the national average, and more in one month than the average American home uses in a year.

But it’s okay for the high priests of environmentalism to live outside the boundaries they expect others to observe, because the work they do is so important, don’tcha know? And besides, even if they are responsible for greater-than-average energy consumption, it’s okay because they purchase carbon offsets.

Carbon offsets are a neat little cheat device that allows a person to continue their comfortable lifestyle by funding someone else to cut back on their polluting activities. You don’t cut back; someone else does, and that computes to an overall reduction in carbon emissions, as the story goes. All that is required is that the person who doesn’t want to cut his carbon usage pays a nominal fee for the privilege, which enables them to continue living with a clear conscience. “We’ll conserve so you don’t have to,” might be the motto of the carbon-offset industry.

George Monbiot, an English environmentalist and writer, disagrees with the principle of carbon offsets, and has compared this practice to purchasing indulgences during the Middle Ages, whereby people believed they could purchase forgiveness for their sins, instead of actually repenting and sinning no more. He also says that carbon offsets are an excuse for business as usual with regards to pollution.

And, a program on a local TV station in Britain entitled "The Great Green Smoke Screen" showed academics and environmentalists questioning the ethics and impact of offsetting - and suggested that offsetting schemes have not been effective as claimed. Others are concerned that using carbon offsets actually increases demand for polluting sources of power, since overall power consumption is not being reduced.

But, friends, the old maxim is still true today: What’s good for the goose is good for the gander. And the environmental elitists need to understand that if they are going to be taken seriously, they have lead by example.