Bush Action on Libby Is A Positive Step 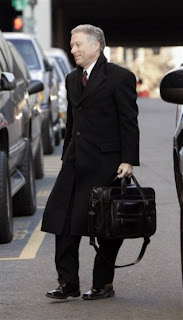 President Bush, on a long downward slide in the Observations universe for his ham-handed policy on illegal immigration and a few other anti-conservative positions, has rebounded a little by commuting the jail sentence for Louis “Scooter” Libby. Yes, Mr. Bush ought to have given Mr. Libby a clear and unequivocal pardon instead, but at this point in time, I’ll accept trashing the absurd jail term imposed by the trial judge, Reggie Walton, who lacked the grace and good judgment to allow Mr. Libby to remain free while his appeal works its way through the system, as even common thugs and punks and real criminals are most often allowed to. Louis Libby is not, after all, Sandy Burger.

Just to remind readers, Mr. Libby has the remarkable distinction of having been trapped into perjury and obstruction of justice charges in an investigation into a crime that didn’t happen by an over zealous Special Prosecutor determined to put someone in jail, even though no laws had been broken, in order to justify the investigation that cost taxpayers millions of dollars and produced nothing of substance. Yeah, I know: He was convicted by a jury of his peers, and all of that. But remember that just because you are convicted doesn’t mean you are guilty. And if you choose to argue that point, remember all those innocent people that get released from jail when it is finally determined that the prosecutors that charged them and the juries that convicted them were wrong.

And if that doesn’t convince you, if you still are moved by the political rhetoric of the likes of Harry Reid, Joe Biden and Nancy Pelosi, with their righteous indignation, and sanctimonious oratorical drivel, try to objectively consider what Louis Libby actually did. Or didn’t do.

When you take the politics out of the Libby case, he did nothing to warrant even an indictment, let alone a trial, and not even a mention or a thought of a conviction and a sentence.