Paris Back in the Hilton

So, young, naughty Paris, who finally got what she deserved, and what might actually have benefited her, developed a reaction to jail and got sent home. 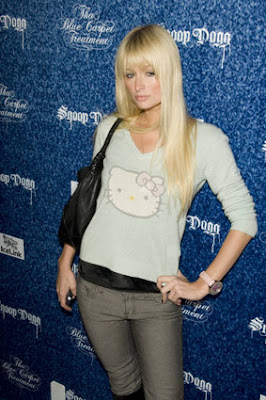 on a drink-driving conviction, she was told there was no prospect of early release. But guess what? She got an early release; the sentence was cut in half after she was given credit for good behavior. Just what was good about her behavior? And why did that merit halving her jail time, given that she drove drunk, then ignored her probation, and then after that showed up late for court, and then, again, said that, no, she hadn’t read the court documents, that one of her “people” was supposed to have done that?

But the 26-year-old out-of-touch, self-absorbed heiress will now be kept under house arrest and must wear an electronic tag for another 40 days. Oh, the shame of it! The utter humiliation!

She was held at the Century Regional Detention Centre in Lynwood, California, where she was credited with having served five days, and where her lawyer said she spent 23 hours a day in a solitary cell. She was separated from the main prison population in a special unit for celebrities, public officials, police officers and other high-profile inmates.

So, what went wrong?

The decision to send her home was made as a result of a medical problem, but officials refused to give details of the condition, citing privacy issues. Other sources said that she cried all the time, that she said the jail was too noisy, that she didn’t eat, and the kicker: she developed a rash. What that says to me is that the therapy was working, not that she needed to be sent home to mommy.

I guess this is just one more pitiful example of what passes for justice, sometimes, in America.

But what message does this send to other young people? Or, to older people, for that matter?