Nancy and Harry Are Doing a Bang-up Job 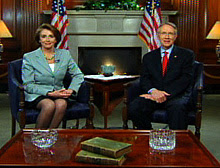 USA Today reports “fewer Americans approve of the way Congress is handling its job than at any time since shortly after Republicans impeached President Clinton, a Gallup Poll finds.” The story goes on to say that while fewer than one-in-two Americans gave Congress a thumbs-up last month, now only slightly more than one-in-three approve of the job the national legislature is doing, and only 14 percent say they have a "great deal" or "quite a lot" of confidence in the Congress.

Disapproval ratings have risen from 48 percent in February to 53 percent. And that may be the good news. Other polls show approval ratings from 23 percent to 43 percent, and more polls are in the 20s and low 30s that in the upper realms.

Not much, really. Aside from passing minimum wage legislation, the highly vaunted first 100 hours turned out to be a bunch of hot air, which is not unusual for Washington, even during the winter. And what has happened since then is even worse than raising the minimum wage. Democrats have squandered their thin majority with political dilly-dallying, wasting their time and our money on such boondoggles as trying to pass a no-confidence measure on the Attorney General, and both parties are driving the wrong way on the immigration highway, trying to pass a foolish immigration plan that hardly anyone outside of Washington likes, excluding the illegal aliens and their employers who will benefit from it.

Little wonder, then, that its ratings are in the tank. The 14 percent figure is an interesting number. According to the National Science Foundation, more Americans believe in UFOs (30 percent), or in astrology (31 percent), or in the theory that President Bush knew in advance about the 9-11 attacks (22 percent), or agree with Rosie O’Donnell that explosives brought down the world trade center (16 percent), or believe in Big Foot and the Loch Ness Monster (17 percent), than believe in the job Congress is doing.