Ever Heard of “Arrowhead Ripper?” I Thought Not 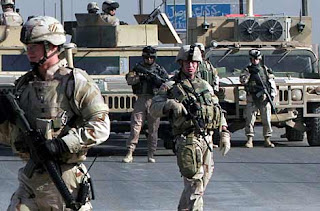 Reports of U.S. and Coalition casualties keep making the news from Iraq, but the Bush administration must have done an excellent job of keeping at least one secret: Operation Arrowhead Ripper. Or maybe there is another explanation.

According to Michael Yon, who is embedded with U.S./Coalition forces in Iraq, "interest in the war is waning back home, I'm told, which may explain the thinning ranks of reporters over here.” That’s one reason you haven’t heard about Arrowhead Ripper, and maybe not the most relevant one, but maybe you should know exactly what it is. Yon writes on his Web site, “The immediate goal of Arrowhead Ripper was to free Baqubah of al Qaeda, by trapping and killing its members, but according to American officers here, public remarks by senior military officials may have flushed many AQI leaders before the attack. Despite this frustrating and significant setback, progress toward the end-state goal of Arrowhead Ripper—turning over Baqubah to Iraqi government control—appears to be working, at least in terms of the removal of the current AQI leadership and its quasi-government.”

Anyone interested in knowing more than the mainstream media’s reports from Iraq ought to check out this site and read Yon’s reports. It will broaden your perspective.