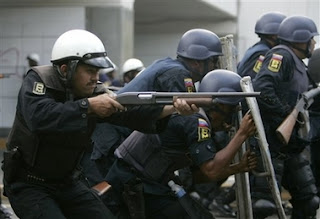 Hugo Chavez, the socialist Venezuelan president so beloved by such Americans as actor Danny Glover and one-time singer Harry Belafonte, and whose big mouth and dearth of good sense has earned him the scorn of every decent American, is in trouble with his own subjects over the shutting down of the country’s only dissident TV station, RCTV, the most popular station in the country. And Chavez, ever the demagogue, explains that he took this action because he wants to democratize the airwaves by turning the network's signal over to “public use.”

Venezuelan National Guard troops fired tear gas and rubber bullets into a crowd of thousands of protesters angry over the shutting down of RCTV, which was critical of Chavez’ government. Recent reports say one person has died in the protests. Crowds of students demonstrated across Caracas, saying they fear for the future of free speech.

Maybe the students are right; none of the other TV stations in Venezuela carried news of the 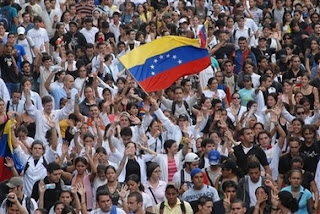 Chavez refused to renew RCTV's broadcast license because of its "subversive" activities and for backing a coup against him in 2002. The replacement public channel, TVES, launched its transmissions immediately after RCTV was shut down with pro-Chavez music, followed by an exercise program and a talk show, interspersed with government ads proclaiming, "Now Venezuela belongs to everyone."