Call It What It Is: Illegal Immigration 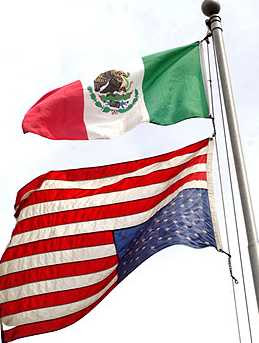 No beating around the bush here. No deliberate obfuscation, or euphemistic niceties to protect feigned sensitivities, and no effort to circumvent unwarranted outrage, people who come into this country without following the proper procedure—that means illegally—are going to be called what they are: Illegal aliens. They aren’t “undocumented workers” or “undocumented immigrants,” they are illegal aliens, plain and simple. Period.

This is a simple enough concept that nearly anybody can understand it: Title 8 Section 1325 of the U.S. Code, "Improper Entry by Alien," says that any citizen of any country other than the United States who enters this country without following the prescribed procedure has committed a federal crime, punishable by criminal fines and imprisonment for up to six months. Repeat offenses can bring up to two years in prison.

Every country has not only the right but also the duty and responsibility to control who comes in and who goes out. It is just amazing that so many people in the U.S. either don’t realize this fundamental principle, or disagree with it. We should have learned something on 9-11 about sloppiness in determining who gets in and why they want to be here, and about keeping track of those we let in. We also should have learned that there are people in the world who hate us and our way of life and are determined to put an end to both. Unfortunately, the well justified concern we should have about prospects for our future survival and existence has melted away in the heat over George Bush winning re-election in 2004, over an unpopular war that our Congress approved, and over misplaced sympathy for folks in other countries who are less fortunate than we.

Not all illegal aliens are bad people, of course, but not all illegal aliens are good people, either. They all share one big negative, however: They broke the law to get here. It doesn’t matter what the motive is for any illegal alien in this country. It doesn’t matter if they are terrorists seeking to do us harm, or if they are salt-of-the-Earth people from south of the border coming here to make a better life, or if they are drug smugglers from South America trying to ply their trade, they are all the same in the eyes of the law if they came across our border illegally, and we had better wake up to that reality.

The question isn’t what do we want our country to be like? It isn’t whether we want X percent of our population to be this or that, or whether there should be more of one sort or another. No, the question really is who decides what our country is going to be like? Will it be the citizens who were either born here or legally emigrated here from another country and adopted our culture as theirs? Will it be those of us who are citizens and who have a stake, a vested interest, in maintaining the fundamental society given to us through the revolution more than two centuries ago?

Or will it be those who come here from another place they didn’t like, or that couldn’t meet their needs, who came here not to become Americans but to remain who they are and expect us to adapt to them? Will it be people who actually want to fundamentally change our society to suit their needs and wants while we just sit and watch, or worse, through ignorance or neglect or warped thinking help them?

The following story came in the email the other day. I think we ought to heed its message:

I bought a bird feeder. I hung it on my back porch and filled it with seed. Within a week we had hundreds of birds taking advantage of the continuous flow of free and easily accessible food. But then the birds started building nests in the boards of the patio, above the table, and next to the barbecue. Then came the poop. It was everywhere: on the patio tile, the chairs, the table...everywhere. Then some of the birds turned mean: They would dive bomb me and try to peck me even though I had fed them out of my own pocket. And others birds were boisterous and loud: They sat on the feeder and squawked and screamed at all hours of the day and night and demanded that I fill it when it got low on food.

After a while, I couldn't even sit on my own back porch anymore. I took down the bird feeder and in three days the birds were gone. I cleaned up their mess and took down the many nests they had built all over the patio. Soon, the back yard was like it used to be...quiet, serene and no one demanding their rights to a free meal.

Now lets see...our government gives out free food, subsidized housing, free medical care, free education and allows anyone born here to be a automatic citizen. Then the illegals came by the tens of thousands. Suddenly our taxes went up to pay for free services; small apartments are housing 5 families: you have to wait 6 hours to be seen by an emergency room doctor: your child's 2nd grade class is behind other schools because over half the class doesn't speak English: Corn Flakes now come in a bilingual box; I have to press "one" to hear my bank talk to me in English, and people waving flags other than "Old Glory" are squawking and screaming in the streets, demanding more rights and free liberties.

Maybe it's time for the government to take down the bird feeder.