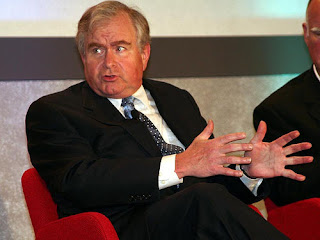 News Item: “Clinton White House National Security Adviser Samuel Berger, who was convicted of taking classified terrorism documents from the National Archives, has agreed to surrender his license to practice law. In a written statement issued by his attorney, Larry Breuer, Berger, 61, said: ‘I have decided to voluntarily relinquish my license. While I derived great satisfaction from years of practicing law, I have not done so for 15 years and do not envision returning to the profession. I am very sorry for what I did, and I deeply apologize.’”

“Agreed to surrender” his law license? What’s that all about? And don’t you just love the apology? Notice he doesn’t apologize for pilfering irreplaceable documents from the National Archives by stuffing them in his pants until after he says, in effect, “Oh, well, I don’t need a law license any more, so I don’t mind giving it up?”

Berger's "punishment" was a pittance of a fine—although $50,000 sounds big, it didn’t put a strain on Berger’s finances—former Pentagon analyst Larry Franklin has been financially ruined and sentenced to 12 and a half years for passing along far less-classified information to unauthorized third parties. I won’t bore you with tales of the inequities of the press coverage of these two cases, but take my word on it, Berger got a pass.

Berger ought to have had his license taken from him, and be in jail, to boot.