The Difference Between Idealism and Reality 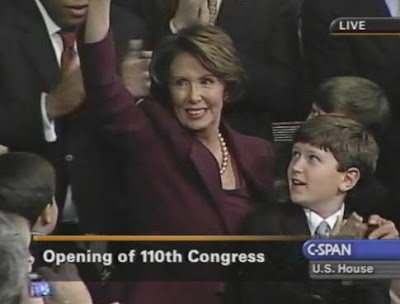 Things just aren’t going to suit Nancy Pelosi. Since the Democrats claimed majority status in Congress last month there have been more downs than ups for the first female Speaker of the House of Representatives. For example, she vowed that five-day workweeks would be a hallmark of a harder-working Democratic majority, but so far the House has worked only one five-day week, and the rest have been the “standard” three-day weeks.

She raised eyebrows and garnered justified criticism when she put Rep. William Jefferson (D-La.), who had $90,000 in alleged bribe money in his freezer, on the Homeland Security Committee after pledging to make this "the most ethical Congress in history." (Making one Congress more ethical than another one is not a very ambitious goal by some standards, but a difficult task nonetheless.) "Pelosi had to put him somewhere," said an observer who was a minority counsel for a House Judiciary Committee member, "but I am troubled by the fact ... that [Jefferson] is the kind of guy who could not pass a security clearance test and yet now he has access to top-secret government info."

And, now Ms. Pelosi is showing some skin. Thin skin, that is. Vice President Dick Cheyney recently commented, "if we were to do what Speaker Pelosi and Congressman Murtha are suggesting, all we will do is validate the al-Qaeda strategy. The al-Qaeda strategy is to break the will of the American people ... and then they win because we quit."

Ms. Pelosi called President Bush complaining that Mr. Cheney had impugned her patriotism. Mr. Cheney's comments, however, represent an argument over policy, not patriotism, and the perception of Ms. Pelosi’s patriotism is no weaker following the Vice President’s remark than before it.

A recent poll showed that Ms. Pelosi’s approval rating for running the House is at 50 percent, but that is better that Congress overall, at 41 percent, neither figure all that much to get excited about. All of which brings two things to mind: First, it is routine for liberals to expect results that are not realistic. Second, trying to change the direction of the House of Representatives, where inertia has a tremendously advantageous head of steam, is not so easy as it might appear to an idealistic new Speaker.

Ms. Pelosi is learning the same lesson that Newt Gingrich learned after becoming Speaker in 1994, and that is no matter how honorable the goal, politics rules in Washington. And we can be assured that Nancy Pelosi is at best just another Speaker, and not Superwoman. At least not yet.