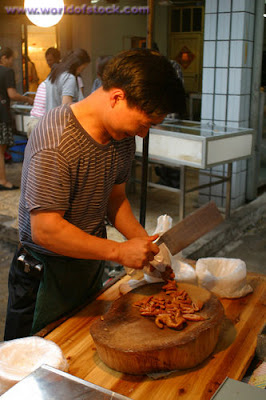 Note: Thanks to Winfred Mann, who pointed out that a word previously used in this piece is actually a noun (blush) when I thought it was only a verb. I have replaced that verb/noun with another word.

My wife Diane is a great cook. She studied, then taught, Home Economics, and cooking was her favorite element of Home Ec. I cook, too, though not nearly as well as Diane, and we both like food, so naturally we enjoy watching the Food Network. It’s great to see how the great chefs like Emeril Lagasse, Bobby Flay and the others do things, and find some great recipes to try out. And it’s equally good to look at Giada De Laurentiis, Sandra Lee, and Nigella Lawson (But that’s another topic). It used to be that the Food Network’s show personalities were professional chefs, but more recently they have shows featuring people who have some cooking specialty or another, but are not working as chefs.

Now, I am somewhat of a malcontent. Something attracts my attention, negatively, and I focus on that, and often I pick it to death. Such is the case with the Food Network. Or rather, with the people with shows on the network. Being someone who writes and who works with words and strives to use the language correctly, and as a writing tutor at a local college where I am expected to know right from wrong, I am sensitive to language and how it is used. Or, perhaps more properly, MISused. Okay, perhaps I’m more than sensitive.

I am especially irritated by the jargon, the “chef-ese,” used by people who cook on TV. Probably every career field has its own jargon, and I suppose the likelihood that they all are equal offenders of the English language is relatively high, but for some reason the chef-ese is especially irritating. They say things like, “Run your knife through it.” That conjures up images of pirates pillaging a merchant ship: “Run ‘em through with your sword, Matey! Aaaarrrgh!” What they mean, of course, is to “chop” whatever it is that they tell you to run through.

I also wonder why so many things are “upped” when cooking? “Cook this up until it’s brown, then serve it up.” Of course, you would never “chop up” something; you have to run your knife through it, although you would likely be told to “sharpen up your knife.”

However, as annoying as those verbal misdemeanors are, the most maddening of these chef-ese verbal misappropriations is the penchant for making nouns out of words that clearly, and traditionally, are verbs. When one of these cooks say something like, “Give it a quick knead,” I grit my teeth. Audibly. Diane frequently gives me that look, the one that says, “get used to it. This is how they talk.” The temptation to ask “Would you like a pink knead, or a mauve knead?” is great. Why the need to use words improperly? Why not, "Knead it a little?” Or, “Knead this until it is glutened up?”

Not only is this verbal misbehavior grammatically improper, it is also inefficient. It takes more words and more time to say, “Give this a little knead” than to say, “Knead it.” I guess the rule is that proper language, brevity and efficiency are not so important when you are cooking something up. And now that I’ve given it a rough rant, I’ll give up.