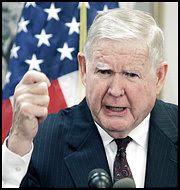 Or do you think you and your fellow travelers in the anti-Bush, anti-war camp are above the Constitution, Article II, Section 2, which vests control of the military in the President, acting as Commander in Chief.

Presidents have made mistakes for years in allowing Congress to act when it is neither called for nor wise, as in allowing the Senate to approve which general or admiral gets what top position. That is the President’s decision; the Congress has no roll in it. Yet, presidents, apparently trying to be nice and cooperative, have made the mistake of putting these assignments up for approval. Such behavior only increases the self-importance imagined by certain members of Congress.

In this case, they have come to believe they can manipulate the Commander in Chief by playing with funding. Such behavior is inappropriate, dangerous, and reflects the arrogance and petulant nature of Mr. Bush’s enemies, led by John Murtha.
Technorati Tags: America, Democrats, Politics, Liberalism, U.S. Constitution, Iraq War
Posted by James Shott at 2/24/2007 11:28:00 PM