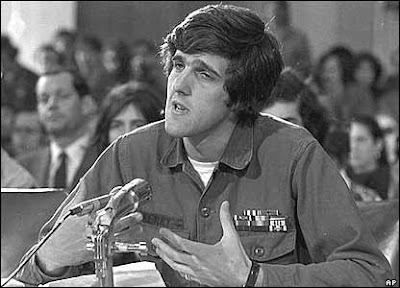 The Associated Press reports that Massachusetts Sen. John Kerry is prancing around the world bashing his country and his country’s president again. That really is no surprise; Mr. Kerry has a long record of advertising his poor judgment and indulging in juvenile bad mouthing of various aspects of his country, among which is the same military he conned out of two or three medals while in Vietnam. It is this characteristic that worked so heavily against him in the 2004 election. How else to explain how someone as dumb and unpopular as George Bush could have beaten an elitist as suave, debonair and cavalier as the husband of the Heintz Ketchup heiress? And it is that characteristic that would have sunk a 2008 bid for the presidency, too; the American people are too smart to elect a classless act like John Kerry, even if the people of Massachusetts are not.

As if to underscore his disconnection from reality, Mr. Kerry in Switzerland recently said, “When we walk away from global warming, Kyoto, when we are irresponsibly slow in moving toward AIDS in Africa, when we don’t advance and live up to our own rhetoric and standards, we set a terrible message of duplicity and hypocrisy.” Well, two things John Kerry knows well are duplicity and hypocrisy. The Kyoto agreement was a disaster for America, and while Mr. Kerry is unable to recognize that, thankfully, Mr. Bush did. (A post is coming on that subject soon.)

Anyone smart enough to lose a presidential election to George Bush, a man Mr. Kerry fanaticizes he is superior to, is smart enough to cherry-pick issues to find room for criticism of just about anybody, and John Kerry certainly fits that description. Still smarting from his pitiful campaign in ’04, the Senator resorts to petulant foot stomping. Now, foot stomping is an acceptable form of protest for folks with the high pedigree of John Kerry, but you shouldn’t stomp and whine in someone else’s house; you do that in the privacy of your bedroom, lest you show the world your backside. (That’s another area of expertise for Mr. Kerry.)

Mr. Kerry thinks the government needs to use diplomacy to improve national security. “We need to do a better job of protecting our interests, because after all, that’s what diplomacy is about,” he said. Right-O John. When Islamic terrorists are at your door, talk to them. President Kerry? God forbid.

It’s difficult to pick one of Mr. Kerry’s comments as the most inane, but perhaps this one takes the prize: “But you have to do it in a context of the reality, not your lens but the reality of those other cultures and histories.” He thinks Americans have an “unfortunate habit” of seeing the world “exclusively through an American lens.” Every good American believes we ought to abandon our American perspective in favor of someone else’s, right? Perhaps France’s, Monsieur Kerry? What an arrogant ass!

I am on the verge of suggesting that John Kerry stay in Switzerland, but then I don’t have any reason to wish that on the Swiss.