Democrats Preparing to ... What? 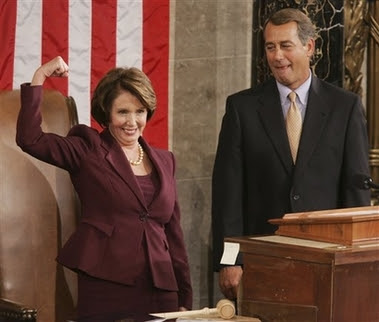 Now that the Senior Prom is over in Washington, and the Democrats’ merriment has dropped from a roar to a noisy clamor, it’s time for Congress to get to work. Based on experience, I wish they’d just keep dancing. Someone, perhaps Will Rogers, once said something like, “America is never in greater danger than when Congress is in session.” I can’t find any reference to who said that, so maybe it was me. I’d be pleased to be credited with having said it.

Anyway, what is frightening about the next two years is that the Democrats view government as the solution to all problems and invariably equip government to inappropriately stick its nose even further into our business than it is already stuck. The phrase “we are the Democrats and we are here to protect you” has already begun to ring out throughout the Capital.

An editorial in the New Hampshire Union Leader had this to say: “Speaker [Nancy] Pelosi has promised that the new powers that be in Congress will protect us helpless Americans from a host of perceived evils: big oil, corporate lobbyists, stingy employers, debilitating diseases, etc. In the next two years, lawmakers in Washington and Concord will attempt to expand the scope of government action. They will pass laws ostensibly designed to protect the weak from the powerful. But in doing so they will make the government that they control, already more potent than the richest tycoon or largest corporation, even more powerful. In many cases they will replace the collective judgment of millions of Americans with the judgment of a few hundred lawmakers.”

The Democrats are fully prepared to enact legislation and spend our money to protect us from ourselves, and to protect us from all manner of threats, real and imagined. And, they plan to do it on a pay-as-you-go basis, which is in some ways a good thing. However, that means tax increases. The Democrats just don’t have enough money to work with, and God knows they wouldn’t think to spend less. Heck, even the Republicans can’t make themselves spend less; for the Democrats that concept is a non-starter. Instead, they want to take more money out of the private sector, where it produces goods and services, provides jobs, and produces dozens of other beneficial results, and put it in the government sector where it fuels the inefficiency and intervention into American’s daily lives for which our government is so famous.

I could be wrong; history might not repeat itself. But I’m not confident.