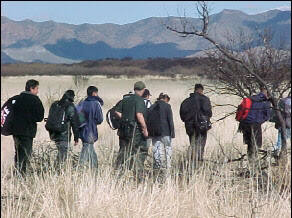 The illegal immigration problem along our southern border has been replaced in the news lately by insignificancies like Miss USA being forgiven for being a naughty girl, and irrelevancies like the Iraq Study Group report, and other equally unimportant topics, but at some point the issue is going to have to get serious attention from Washington.

Nothing thus far has succeeded in waking George Bush to one of the greatest threats to the U.S. In terms of the economic strain of taking care of illegals’ health problems and sending children to school puts on states; the fact that some illegals are thugs and drug dealers; the very real possibility that terrorists can use the neglected border to enter the country, and other serious ramifications, all that has fallen on deaf ears at the White House.

A recent incident puts a sharp point on just how stupid the United States is being with regard to illegal immigration:

The criminal had 750 pounds of drugs in his van, and was ILLEGALLY in the US. Two Border Patrolmen stopped the van and the illegal ran, at which time the agents opened fire, striking the criminal in the butt.

According to a criminal complaint that led to an indictment, on or about February 17, 2005, a Mexican criminal attempting to flee back into Mexico near Fabens, Texas, was shot at by Agent Jose Alonso Compean , who fired approximately 12 rounds from his service pistol, and Agent Ignacio Ramos fired approximately two times from his service pistol striking the victim in the butt. The two agents have been tried and convicted, and face jail time beginning next month.

For doing their job trying to protect their country, trying to arrest a criminal who entered the US illegally with drugs, these two devoted men are being punished by their own government.

I suggest that everyone call one of the numbers below, or fax a letter, or email a letter, or write a letter, and overwhelm the White House switchboards and personnel with demands that these two agents have their convictions overturned, and be awarded a commendation by their country in apology for the absurd circus that their own government has put them through for doing their job.

[[[New material]]] Also, go to www.grassfire.org and sign the petition, which already has more than 160,000 signatures.