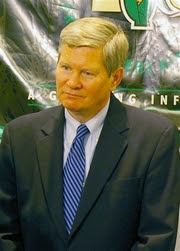 The media’s reaction to the medical problems of South Dakota Senator Tim Johnson, who suffered a stroke-like episode yesterday during a telephone conversation with reporters and later collapsed, is disgusting. Sen. Johnson, a Democrat, underwent brain surgery last night.

The media is breathlessly reporting that Sen. Johnson is in “critical condition” and already speculating about what will happen if the Senator cannot continue to serve in his elected post.

It is not uncommon; in fact, I believe it is routine for a brain surgery patient to be classified as “critical” following surgery, but every headline contains this fact, and every story is written as if this is unusual. Not to put too light an emphasis on being in critical condition, because that is indeed a grave condition and something horrible could happen, but does it really deserve the play it is getting?

Next, we are treated to speculation that if Tim Johnson is unable to continue to serve the Governor of South Dakota, Republican Mike Rounds, might appoint a Republican to the open position, taking away the Democrats one-seat majority, and splitting the Senate 50-50, leaving the decisive vote on ties to the Vice President, Republican Dick Cheyney.

Two suggestions: 1. We ought to tone down all of this “sharks-in-the-water” coverage until we know Sen. Johnson’s condition, and wish the man a speedy and complete recovery. 2. If Tim Johnson is unable to serve and Gov. Rounds appoints a replacement, he should appoint a Democrat. The people of South Dakota elected a Democrat, and they deserve to have a Democrat in office throughout the term.