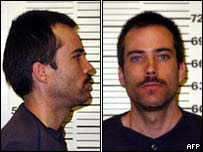 Eric Rudolph, the Olympic Park Bomber, the American domestic terrorist who committed a series of bombings across the southern United States in 1996 that killed three people and injured at least 150 others, is complaining about his prison cell and the facility where he gets his exercise. The room is too small, the mistreated Eric says, and the exercise yard is like a dog pen.

Aaah, poor baby. Prison isn’t all you thought it would be when you decided to kill innocent people? What a shame. I think you have too much room, and I further think you ought to spend the rest of your miserable life in a dog pen. A real one.

Wake up, you self-absorbed boob!

That’s why we have rules about killing people in the United States; you follow the rules, and you don’t go to jail. You should be damned happy you can still draw breath, because if it was up to me, you’d have been put to death years ago.
Posted by James Shott at 12/11/2006 08:50:00 AM