Some Perspective on the Foley Situation 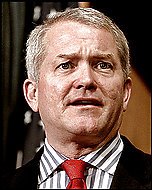 Mark Foley is a troubled man. The Florida Republican Congressman is gay, apparently has an alcohol problem, and is now in the middle of a scandal over indecent proposals with a 16-year-old male House of Representatives page that has lasted a couple of years. Emails came to light last year, but more damning are older and more graphic instant messages that, from what we know right now, were not known of by Republican Congressional leaders until this week.

As bad as what Foley did is, he has done some good things, including his instant resignation from Congress when the news broke, and entering a program to get help. But more importantly, Foley was very active in stewarding through the legislative process and passing child abuse legislation. Despite the incongruence of someone who himself was improperly interacting with children being active in passing laws against the behavior he was involved in, Foley’s efforts still accomplished positive results.

A great deal of outrage is focused on the Republican leadership, namely House Speaker Dennis Hastert, for not having been more aggressive in addressing the Foley matter sooner and more forcefully. Some of the outrage comes from fellow Republicans and conservatives, including The Washington Times, which has called for Hastert to resign.

Child sexual abuse, child rape, child murder are all hot-button issues these days, and rightly so. But this situation has quickly escalated beyond justifiable concern into full-blown hysteria. Some of that hysteria is political, since the mid-term election is a month away. Both Democrats and Republicans are gripped by hysteria, the Democrats trying to take advantage of a good opportunity to make political hay, and Republicans trying to minimize the damage and keep this incident from deconstructing their Congressional majority in both Houses.

There is no defense for what Mark Foley did. However, it is important to keep it in perspective. In 1983 two members of Congress were found to not only have had improper communications with pages, as Foley did, but to actually have had sex with them. Rep. Dan Crane (R-Ill.) and Rep. Gerry Studds (D-Mass.) admitted their transgressions, however, those Congressmen did not resign, were not asked to resign, were not prosecuted; they were merely reprimanded.

Two wrongs don’t make a right, as we are frequently reminded, but what happened in 1983—or perhaps more accurately, what did not happen—had a great deal to do with the current situation and how it was handled.