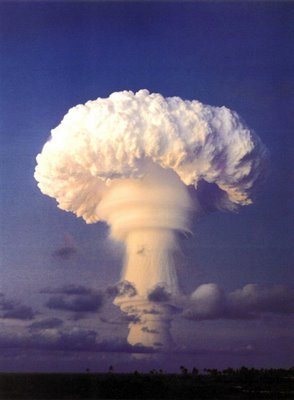 What will it take to wake up the West? Will a nuclear explosion beneath a North Korean mountain be enough? The threat of nuclear terror has been rumbling beneath the surface since 9/11, yet still we’re in denial. Make a deal? President Clinton tried that and failed, accepting a bogus deal, with a porous inspections regime. North Korea flouted the agreement at the first opportunity. Keep negotiating? At this point, the prospect that North Korea is simply positioning itself for negotiations is dim. More likely they’ve given up on the hope of another Clinton-style bonanza (on which they would have simply cheated again), and have decided instead to defy the world, with all the attendant risks. Those risks are huge. If the U.S. and China cooperate now in seriously sanctioning North Korea, the regime could collapse. That would be both welcome and deeply dangerous. On the other hand, if the U.S. and China refuse to cooperate in sanctioning Korea, and break with each other instead, we face yet another sort of destabilizing regional conflict. On top of all this, American interdiction of ships bound for North Korea could lead to war. On the other hand, failure to interdict would reveal the weakness of our position, and would make it that much easier for the North Koreans to smuggle out weapons and nuclear material to terrorists and the rogue regimes of the Middle East. Japan is likely now on course toward a nuclear capability. Japan may also race to gain the capacity for a preemptive missile strike on North Korea’s missile facilities. That in turn could set off a war in which the North launched an artillery barrage against Seoul. Will this put spine into South Korea, or simply send it running further away from the United States?

Korean bombs, missiles, and expertise will sail, fly, run, and walk to the Middle East. Were Saddam still in charge, he would have been first in line at North Korea’s nuclear supermarket. And all the reverberating regional and worldwide consequences of Korea’s nuclear breakout will be replayed, with even more dangerous effect, once Iran gets a bomb of its own. Just as Japan will now arm in preparation for a possible preemptive strike against North Korea, Turkey, Egypt, and Saudi Arabia will shortly arm themselves with nuclear weapons against Iran. Sanctions regimes and confrontations on the high seas in East Asia risk escalating to war, as will the proxy terror strikes against the world’s Persian Gulf oil jugular sponsored by a newly nuclear Iran. And as the sheer number of nuclear states increases, it will become impossible to trace the state supplier of a nuclear terror strike. That, in turn, will free up rogue elements in Muslim states to hand off a bomb to al Qaeda or Hezbollah.

The failure to find WMDs in Iraq, the shrieking of America’s doves, and the constraints of international diplomacy have all prevented the Bush administration from speaking honestly and openly to the American people about the true nature of the threat we face. And pretty much everyone else has taken their eyes off the ball. Iraqi WMDs? Not nearly as important as what Saddam could and would have bought and built with the help of North Korea and A. Q. Kahn. Troubles in Iraq? Not nearly as important as the deterrent effect of an America willing to brave 3,000 casualties for the sake of proving our willingness to take down rouge states. Democratization? Important in the long term, but a sideshow compared to the nuclear knife at our throat. A free-spending Republican Congress? Not nearly as important as the danger of an administration paralyzed by a dovish Democratic congress at this moment of grievous danger. Capital Hill sex scandals? Not nearly as important as keeping the Capital and all its pages from being blown sky-high by Osama’s lackeys.

— Stanley Kurtz is a senior fellow at the Ethics and Public Policy Center.