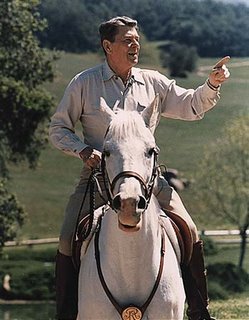 On the Fox News Channel last Friday former Secretary of State James Baker recounted a story about a visit to England several years ago when President Ronald Reagan visited with Queen Elizabeth.

As is customary during such visits the Queen and the President were to be photographed together. Since both enjoyed horseback riding it was decided to have a photo op with the two of them riding horses on the grounds of Windsor Castle.

The President and the Queen mounted their horses and following the photo session rode off away from photographers.

As they were proceeding down the trail the Queen’s mount began expelling gas in short bursts. In her most proper and typically British style the Queen said, “Oh, Mr. President, I’m so sorry.”

To which President Reagan responded, “Oh, that’s alright your Majesty, I thought it was the horse.”
Technorati Tags: Ronald Reagan, Humor, Queen Elizabeth
Posted by James Shott at 10/07/2006 07:49:00 AM