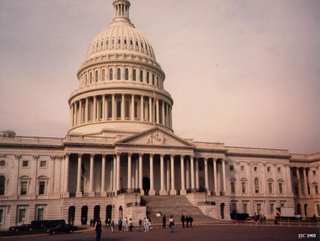 Columnist Jonah Goldberg had this to say about the continuing saga of Mark Foley:

It's hard to believe that the Foley/instant message/congressional-page/GOP meltdown story has run for a week. Other than the slaughter in Amish country, is anyone aware of anything else of note in the world that happened the past seven days? Dive deep enough beneath the Foley flotsam and you discover reports that North Korea may be preparing to conduct an underground nuclear test. China and South Korea are at this hour trying to forestall the Hermit Kingdom's nuke test and no doubt could use an expression of support and outrage from the American political establishment. Sorry, they're busy reading Congressman Foley's 1995 email traffic.

Goldberg correctly notes that Democrats focus on the tawdry and irrelevant instead of really important issues. This is representative of three truths about Democrats: First, they have no substantive issues to discuss, so they are pretty much forced to scream and whine about irrelevancies. Second, they act like children on the playground, tattling on their classmates. And third, they are hypocrites. It was the Democrats, after all, who set the standard for how to deal with tawdry sexual misbehavior by Congressmen back in 1983.

Mark Foley had inappropriate communications with underage pages through email, and made unseemly sexually explicit advances to them through instant messages. That’s bad behavior, but tame by comparison to the activities of Congressmen Dan Crane (R-Ill.) and Gerry Studds (D-Mass.), both of whom had actual sexual relations with pages, Crane with a 17-year-old female, and Studds with a 17-year-old male. The way the leadership reacted to these scurrilous activities is illustrative: The two pleaded guilty to House charges and were—are you ready—reprimanded. Reprimanded. Not expelled. Not asked to resign.

Crane apologized for his behavior, but Studds stubbornly refused to apologize, calling it a mere “error in judgment,” and in fact turned his back and ignored the censure being read from the well of the House Chamber. Studds was repeatedly reelected and made chairman of an important House committee, rewarded by the Democrat leadership of the House. By contrast, Foley resigned immediately upon his behavior being made public, reportedly at the urging of the House Republican leadership.

Funny that as serious as we are told by Democrats that Foley’s behavior was, the behavior of Crane and Studds—which no sane person would argue wasn’t far worse than Foley’s—did not produce calls for the resignation of the Speaker of the House at the time, Tip O’Neill. O’Neill was, of course, a Democrat.

So the Democrats can take credit for establishing the way the House deals with Congressmen who are guilty of sexually related misbehavior.

It’s also funny how the Democrats conveniently do not remember their own indiscretions and shortcomings when an opportunity arises to behave like children on a playground, and to distract the attention of the American people from truly important issues toward foolish dalliances.