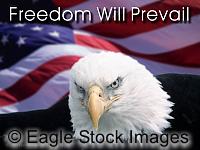 Many people recoil at the measures the Bush administration has taken and proposes to take to protect the country from terrorist attacks. They regard the administration’s efforts at increased national security as “abusive to freedom,” and the less graceful among us make comparisons to “Hitler” and complain of “police state” tactics, as if those things are real.

They feel threatened by their government. They believe they are losing their freedoms. They strongly disagree with the premise that in times of serious threats to our well-being the government should react and intervene to preempt attacks, and that in doing so if the government believes it needs to monitor overseas phone calls and to check up on people accessing information on how to make a chemical or biological weapon, and other such things, it should be allowed to do so.

They believe that these invasions of privacy are not warranted, and that it means absolutely that those freedoms are forever lost.

Let’s roll back intelligence operations to pre-2001 levels. Let’s stop monitoring overseas phone calls to and from suspected terrorists. Let’s repeal The USA PATRIOT Act. Let’s be nice to all the of the captured al-Qaeda and other Muslims combatants in Guantanamo Bay and other facilities, or maybe release them and deport them back home. Let’s stop the silly measures at airports that are such a pain.

Let’s stop all this freedom-robbing activity that upsets so many people and inconveniences so many more, and just take our chances with terrorists. We’re all going to die sometime, right? And a bolt of lightening, an errant beer truck, a car wreck, a mugger, or any number of other threats can always kill us at any moment. Is a terrorist attack really any worse than any of the other things that can kill and harm us? Besides, there are no guarantees that these freedom-robbing measures are going to stop an attack anyway. And the chances of another attack of the proportion of 9-11 are really remote.

This is America, the land of the free. Lot’s of brave men and women gave their lives so that we could be the freest people on Earth, and we have an obligation to protect that freedom. Life is just not worth living if we aren’t 100 percent free. So forget all this national security crap, go out there and eat, drink and be merry.