Is Hillary the Devil? 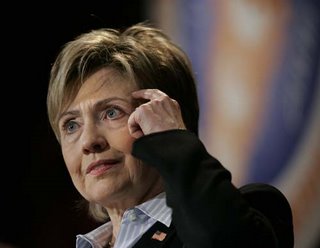 More manufactured outrage from the Left, this time aimed at Reverend Jerry Falwell, who once again is on the Left’s bad side for supposedly comparing Democrat Senator Hillary Clinton to the devil.

The Los Angeles Times published Falwell’s comments: "I certainly hope that Hillary is the candidate," Falwell said, according to a recording the Times cited. "She has $300 million so far. But I hope she's the candidate. Because nothing will energize my [constituency] like Hillary Clinton." Falwell continued: "If Lucifer ran, he wouldn't."

Okay, folks, that’s the signal to start the hysteria: "He was calling Hillary Clinton a demonic figure and openly arguing that God is a Republican," said the Rev. Barry W. Lynn, executive director of the advocacy group Americans United for Separation of Church and State.

Good grief! Are people really that intellectually deprived? Can they really not discern the meaning of words arranged in a particular order? Or, are they just cocked and ready to jump to a conclusion that will, hopefully, produce a political advantage. The answer is the latter. Falwell did not compare Hillary Clinton to the devil, or call her a demonic figure or say God is a Republican.

You wonder if these same people imagine they’ve seen an alien spacecraft each time they see a meteorite streaking through the sky. But the Left, devoid of ideas, goes immediately for the lowest common denominator, because when you don’t have better ideas, or any ideas, the best you can do is appeal to the emotions.

Much ado about nothing.