How Stupid Are We? 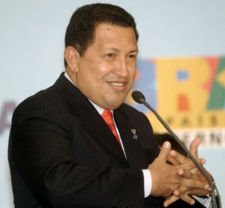 It’s bad enough that miscreants like Mahmoud Ahmadinejad and Hugo Chavez have to set foot in the United States in order to appear at the United Nations, but what in the world were we thinking when we allowed the tin horn Marxist Hugo Chavez to roam around New York City bribing the locals with shallow sentiments and appealing goodies?

Not only that, but during one public appearance Senor Chavez slipped in the subtle comment that he had been told that he might be killed because of his juvenile rant against George Bush before the General Assembly.

Appearing Thursday at a Harlem Church for an oil-for-poor event, Senor Chavez repeated his reference to President Bush as “the devil” originally made during a speech at the U. N. and told the audience packed into the Mount Olive Baptist Church in Harlem, "They told me that I should be careful after I called him the devil — and I think he is the devil — because he might kill me,” as if W. was going to come after him with a gun. Senor Chavez was introduced at the podium by that great American Danny Glover, the actor-turned-traitor who was visiting the church as part of ceremonies to announce the sale of discounted home heating oil to qualified low-income families. "But, I place myself in the hands of God," the tin horn said. Somehow, I doubt that Senor Chavez will be headed in that direction when he gets his just desserts.

What a perfect jackass.

Yeah, I know nobody’s perfect, but Chavez is close. A perfect ass, that is, but he’s not too smart. Yeah, I know, he’s smarter than the doofus that allowed him free reign in NYC, but that’s still not very smart.

No doubt he feels really special because the nincompoops in the General Assembly laughed at his inanities and applauded his insults of the President of the United States. But Senor Chavez didn’t think this through in advance, and he probably still hasn’t figured out that he has revealed himself to be a second- or third-rate dope before the whole world.

You can tell that someone has really screwed the pooch when prominent Democrats object to criticisms of George Bush. "I just want to make it abundantly clear to Hugo Chavez or any other president - don't come to the United States and think because we have problems with our president that any foreigner can come to our country and … offend our Chief of State," Representative Charles Rangel (D-NY) said. “George Bush is the president of the United States and represents the entire country,” declared Mr. Rangel. “Any demeaning or public attacks against him are viewed by Republicans, Democrats, and all Americans as an attack on all of us.” Good on you, Charlie!

Even House Minority Leader Nancy Pelosi (D- Cal.), a constant critic of Mr. Bush, criticized Senor Chavez. "The manner in which he characterized the president demeaned himself and demeaned Venezuela. He fancies himself a modern day Simone Bolivar [the Venezuelan statesman known as "the Liberator" for leading his country’s revolt against Spain in the early 19th century] ... But he is an everyday thug," said Ms. Pelosi. Calling a spade, a spade.

Having established that Hugo Chavez is a third-rate tinhorn ass, the question then arises whether the United Nations ought to be allowed to remain headquartered on U.S. soil. An agency so feckless, so incompetent, so corrupt, so clawless, so clueless does the United States a disservice by its very presence within our borders. But perhaps it’s better to have the U.N. here, where we can keep an eye on it, than somewhere else, like Venezuela or Iran, for example.

That’s a subject for another day.