Does Anything Make This Okay? 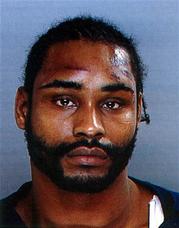 Ricky Jovan Gray was convicted Thursday of capital murder in the New Year's Day slaying of Bryan Harvey, 49, his wife, Kathryn, 39, and daughters Stella, 9, and Ruby, 4. The victims were found in the basement of their burning home, bound, beaten with a hammer and stabbed, with their throats cut. Prosecutors say Gray, 29, and his nephew, Ray Joseph Dandridge, killed the Harveys during a bloody crime spree that included the slaying of a second Richmond family less than a week later. A police detective from Philadelphia, where the men were arrested Jan. 7, testified Thursday that Gray confessed to those crimes and others, including the November slaying of Gray's wife near Pittsburgh.

Relatives testified Friday that Gray's childhood was filled with abuse. His mother wept as she testified that he was beaten repeatedly with a horse strap by his father and was sexually abused by a half brother for years.

So, your childhood wasn’t good. Okay, it was a nightmare. But that doesn’t make it okay for you to kill people. Understand?

I continue to wonder to what degree our national affinity to understand violent crimes and to have compassion, rather than contempt, for those who commit inexcusable acts of violence has actually created a culture of victim hood that conveys the message that because you had some bad luck you can do pretty much anything you want, and it will be okay.

Well, Ricky, it’s not okay. Your childhood does not excuse your barbaric behavior.

If everyone who didn’t have a perfect childhood went out as adults and started kicking dogs, beating our spouses, robbing convenience stores, assaulting innocent people and committing murder, the country wouldn’t be able to survive the crime wave. Most of us don’t succumb to the temptation to wallow in our misery. Instead of whining and moping about their bad circumstances, most people try to rise above their negative background and make something more of themselves than being a wanton killer.

I am thinking JS is in another one of those rebellion stages!