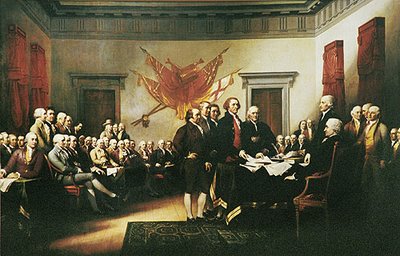 Tomorrow is the Fourth of July, the day in 1776 that the Colonists declared their independence from the oppressive English Crown. The Declaration itself was an intellectual and rhetorical exercise. A group of smart and determined people stated their philosophy of life, listed their grievances against King George III, and walked away from English domination.

It is an eloquent statement, the most familiar portion of which states:

We hold these truths to be self-evident, that all men are created equal, that they are endowed by their Creator with certain unalienable Rights, that among these are Life, Liberty and the pursuit of Happiness. — That to secure these rights, Governments are instituted among Men, deriving their just powers from the consent of the governed, — That whenever any Form of Government becomes destructive of these ends, it is the Right of the People to alter or to abolish it, and to institute new Government, laying its foundation on such principles and organizing its powers in such form, as to them shall seem most likely to effect their Safety and Happiness.

While the statement itself was relatively easy to accomplish, keeping the English from forcibly retaining control over the Colonies was not. It required courage and sacrifice, and it required armed action to defeat the British forces.

Our freedom was won by the use of weapons in the hands of the people, and that is a fact that cannot be forgotten or minimalized. Had gun control advocates existed and had their way in 1776, there would be no United States of America today.

The right to keep and bear arms was recognized as essential by the Founders, and they affirmed that right and nine other specific rights in the first ten Amendments to the U.S. Constitution, the Bill of Rights. Those rights have been systematically chipped away, particularly those guaranteed by the Fourth Amendment and the Tenth Amendment. We had better not allow the Second Amendment to be altered by the enemies of freedom, and we had better get busy working through the system to restore those lost to their original level forthwith.

It is our consitution and our basic way of life that has endured the test of time better than many others in history.