What is the True Nature of Islam? 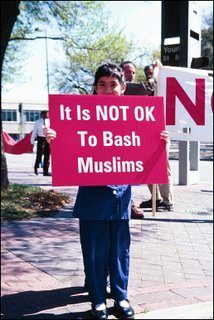 I keep wondering aloud (in writing) just why it is that if Islam is truly a religion of peace the peaceful Muslims do not take a strong, public stand against the fundamentalist fringe (if indeed it is just a fringe) that has hijacked and perverted their beloved Islamic religion, and have created the global image that Islam is a very large group of intolerant, murderous thugs stuck in the culture of 1,400 years ago?

I have encountered a few Muslims in my travels around the blogosphere who take exception to my asking that question, as if by asking it I have done some horrible thing to them. They seem genuinely puzzled that anyone could be so ignorant as to connect Muslim terrorists like Abu Musab al-Zarqawi (may he rot in hell), Osama bin Laden (may his cave collapse on him) and the rest to Islam.

They put forth their arguments in 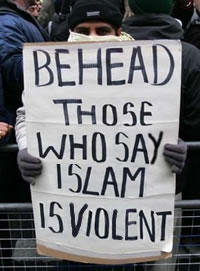 favor of the “peaceful Islam” very politely, instructing me not only about the peaceful aspects of Islam, but also its magnificent superiority to Christianity and all other “pretend” religions of the Earth. They are very forceful in their defense of Islam; less so in admitting that Muslim terrorism is an actual black eye for Islam.

I haven’t been dissuaded from my original position, although I have begun to wonder whether I am guilty of painting Islam with too broad a brush. Perhaps the reluctance of Muslims to condemn their barbarian brethren is not so widespread as I thought; perhaps the suspicion that even moderate Muslims agree with the concept that we infidels ought to be dispatched to the nether regions (they just don’t use guns and bombs to do it like the fanatics do) is misplaced.

The following piece addresses this dilemma. I’m not certain of its origin, so I can’t credit the author, but it was sent to me by my friend and sometimes-blog partner The Windjammer. The writer confirms my position.

Dr. Mahfooz Kanwar recently attended Calgary's largest mosque for a funeral. At one point in the proceedings, a man Kanwar has known for more than three decades led the prayers. "He was saying in Urdu (the official language of Pakistan): 'Oh, God, protect us from the infidels, who pollute us with their vile ways,'" recalls Kanwar, a professor of sociology at Mount Royal College in Calgary.

"I stood up and grabbed him by the lapels, which was shocking even to me because I have never done anything like that in my life and I said: 'How dare you attack my country.' And then I addressed the crowd and said: 'I have known this man for more than 30 years and he has been on welfare for almost all of those years.' " Kanwar chuckles at the memory. "Then I said to this semi-literate man, 'you should thank me and those you call infidels.' "He asked me why and I said: 'Because the taxes I pay are putting food on your table as are the taxes of the so-called "infidels.' "

Most Canadians and many Muslims would applaud Dr. Kanwar's righteous outburst. But guess which of the two men is no longer welcome at the Sarcee Tr. S.W. mosque? Not the intolerant, hate-spewing semi-literate. No, it's Dr. Kanwar who's persona non grata. That, says Kanwar, is just one of numerous instances he has experienced as a result of the culture of ignorance and intolerance that permeates so many mosques in Canada and throughout the world.

In light of the arrests two weeks ago of 17 young Muslim Canadian men who are alleged to have planned terrorist attacks against their fellow Canadians that included attacking Parliament, seizing the CBC and beheading the prime minister, Kanwar says it's vitally important for Canadians to start making more demands of those who immigrate to this country. Kanwar says we now know one of the 17 accused was allowed to spew hatred and calls to violent jihad at a Toronto-area mosque and he was never once told by the leadership there to stop. Six of the young men who listened to him are also charged in the plot.

Kanwar is pretty certain, if he spoke up at that mosque, however, with his message that Canada's culture is better than the culture found in any Islamic-based country, he'd be kicked out. "The policy of official multiculturalism is a disaster," says Kanwar, who ironically once headed a government-funded multicultural organization in Calgary in the early '70s.

Every year, Kanwar's organization would host a large food and crafts festival in the basement of the Jubilee Auditorium. "There were 52 tables, each with two flags on them -- Polish and Canadian, Ukrainian and Canadian etc. When the Alberta minister in charge of funding the festival showed up, I asked him, 'why is there not even one table here with a single flag -- why is there no Canadian table?'"

Kanwar has been questioning the government-funded official multicultural model ever since -- most recently through his 2002 book: Journey to Success, which is used as a sociology textbook at Mount Royal College and other post-secondary institutions. "Multiculturalism creates nations within a nation and divides the loyalty of people," says the 65-year-old Pakastani-born Kanwar, who immigrated to Canada in 1966. "It allows people to marginalize themselves. It endangers us all as these recent arrests show."

Because of Kanwar's open and published opposition to Ontario's proposal last year to consider allowing sharia law for arbitration purposes in that province, Kanwar says he has been issued with fatwahs -- not the death-threat versions made famous by the one issued against Salman Rushdie for writing the novel The Satanic Verses -- but more like a shunning. Kanwar, a devout Muslim, says he has essentially been excommunicated by Calgary's mosques because he is too tolerant of others.

Homa Arjomand, who lives in Toronto and headed Canada's successful campaign of the International Campaign Against Sharia Court in Canada (www.nosharia.com), says like Kanwar, she too once embraced the idea of multiculturalism. Arjomand, who calls herself a "victim" of sharia law -- a strict set of rules based on Islam's holy book, the Qur'an, that subjugates women, as well as allows for the chopping off of hands for theft etc. -- says part of the reason she decided to immigrate to Canada was because she had heard about official multiculturalism. "I thought how wonderful, but not anymore," she declares. "I came here for Canadian values, not sharia values. I fled Iran on horseback because the values there threatened my very life. If people want to live under sharia or the way they lived back home, let them go back," she said.

Kanwar agrees. He says the time has come for the Canadian government to tell new immigrants "once you're in Canada we expect you to be totally devoted to Canada -- no divided loyalties." "This country," added Kanwar, "is a democracy and democracy is founded on Christian principles. "Canada is -- like it or not, take it or leave it -- a country founded on Christian principles where the vast majority of citizens are Christians," said Kanwar. "Yes, there's separation of church and state but even that was a principle founded by Christians and Christianity. "If Muslims, or anyone else, doesn't like living in a land filled with Christians or in a democracy they should get the hell out."