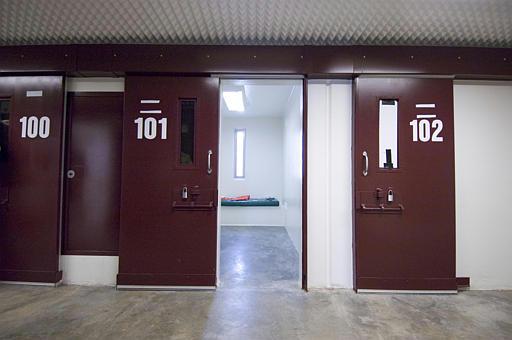 Three of the Guantanamo Bay detainees succeeded in hanging themselves the other day, the first successful suicides in a string of more than 40 attempts by the suspected terrorist detainees. Usually the guards are able to thwart these efforts, but this time, thanks in part to the efforts of human rights organizations, the guards were inhibited in their surveillance of the detainees. You see, in order to provide the most humane and gentle conditions for people who routinely throw feces and urine on their guards and threaten to hunt down and kill their interrogators, these rights organizations insist that detainees be able to cover the window in their door, allowing them the utmost privacy, but preventing the guards from seeing that they are hanging themselves. This event produced new calls for the Guantanamo facility to be closed, and worse.

The most vile barbaric sub-human miscreant terrorizing Iraqis on a daily basis was tracked down last week, and the United States Air Force dropped two 500-lb bombs on his humble abode, taking out Abu Musab al-Zarqawi, a top deputy and four other people. Zarqawi did not die immediately; he fortunately lived long enough to see the faces of U.S. troops and likely recognized that he met his end at the hands of the American infidels. Almost as soon as the news reached the United States there were questions of whether Zarqawi had died of injuries inflicted by the explosion, or whether American troops had put a bullet in his head or beat him to death with the butt of a rifle.

Question for those wondering how Zarqawi died: Who cares? Perhaps the people who ask such questions don’t realize that the purpose of dropping the bombs on the safe house was to kill Zarqawi. In fact, it doesn’t matter whether he died of bomb-inflicted injuries, whether some GI slit his throat or shot him between the eyes, beat him to death or smothered him with a pillow. These individuals likely also do not understand that the purpose of military units is to defeat the enemy, even if (horrors!!!) that means killing him.

Question for the media and other liberals: In such circumstances why do you automatically assume that the military of the United States has done something wrong?