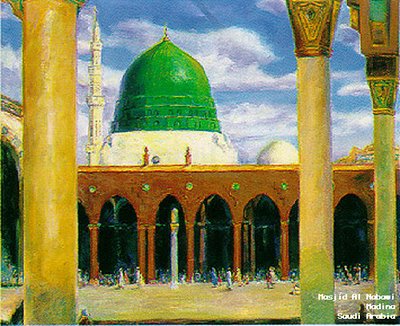 More and more I wonder if there is any hope for expanding freedom in the Middle East. Yes, it looks as if a democratic government may take root in Iraq, although that is by no means a certainty, and perhaps other nations may also adopt democratic principles. However, if what is happening in Iraq is any indication of the probability of success, the best we can do is hope. That is because of problems that are not so much political in nature, but religious in nature. The problem isn’t that people will reject freedom from oppression if offered it, it’s that Islam, or some of its adherents, will not permit it.
I know quite a few Muslims. They live and circulate in our community, and their children attend our schools. Most of them are doctors or are the family members of a doctor. They are immersed to a considerable degree in Western culture, availing themselves of the technological bounties present in our society and the good life that it is possible to live in the United States. It isn’t always and everywhere the same. In Iraq, for example, some Muslims welcome the coalition troops and the efforts to allow democracy to be born; others are fighting it tooth and nail. The internal war in Iraq swirls around religious differences between opposing sects of Islam, pitting the Sunnis against the Shiites and the Kurds.
Examples of Sunni violence abound. The terrorist Zarqawi has gained a large measure of infamy because of his vicious murder of Iraqi Muslims. Zarqawi and his ilk may be more afraid of an end to Sunni dominance in Iraq’s goverment than to some perceived threat to his practice of Islam, although the two are heavily intertwined. But other less publicized violence is more directed at those who are perceived as straying from the prophet Muhhamed’s lifestyle.
A column in the local daily by Deroy Murdock detailed the work of Sunni totalitarians that have killed Iraqis for, of all things, selling ice. To Westerners, and perhaps to a majority of the people of planet Earth this seems irrational, but to these fanatics it makes perfect sense. You see, Mr. Murdock tells us, since Muhhamed didn’t have ice 1,400 years ago; Muslims today should not have ice, either. The killing of four ice merchants occurred in Al-Dora a couple of weeks ago. Violence has also been carried out or threatened against Iraqis for other non-Muhhamed activities such as: selling falafels, tennis players wearing shorts and tee-shirts, men wearing goatees (Jewish fashion, you know), and women riding buses with men or driving cars.
Obviously, these fanatics have targeted some things that were not part of Muhhamed’s existence while ignoring other things that also were not part of Muhhamed’s world. They killed a tennis coach and two of his players because of their wardrobe, apparently allowing people to play tennis if dressed appropriately. They used modern weapons to kill the ice sellers. They killed 21 Shiite, Turkoman and Kurdish students headed to school in mini-buses while sparing four Sunni students. Neither tennis, nor semi-automatic weapons, nor mini-buses existed when Muhhamed sold his wares in the year 600. So these radicals who are mired in the past are hypocrits in addition to being barbarians.
But the overriding point in all of this is that as long as Islam has fanatic factions that are so out of touch with present day life on the Earth, and are willing to kill other Muslims who have moved on to a lifestyle that is in step with the rest of the world, Islam will continue to be derided and be considered a major threat to the world. Those Muslims who are incensed at the widely held negative view of their religion will have to realize and admit that this negativity is self-inflicted. If this view is going to change Islam itself will have to change.
We continue to wait on Muslims to act in their own best interest.
Technorati Tags: Islam, Religion, Terrorism, Extremism, Muslims
Posted by James Shott at 6/10/2006 01:41:00 PM

It only takes a few bad apples to ruin a barrel.

Yet again...another non-Muslim who is accusing Islam! For those of you who accuse Islam of being a religion of violence...WHERE DOES IT STATE IN THE QUR'AN TO GO AND KILL INNOCENT PEOPLE? Please, for your own sakes, shut your ears from listening to what the media says and go and do your own research!!!

If anyone is interested in getting a better understanding of Islam, feel free to visit my blog!