Graduation: Another Tradition Being Destroyed 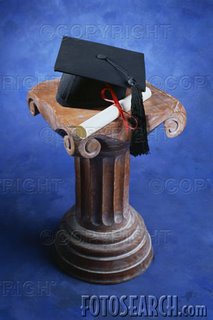 Daughter #3 graduated from high school this weekend. I'm very proud of her; she has done well in school. But it’s a shame what has happened to graduation ceremonies lately. People do not know how to behave, and the entire ceremony has become a caricature.


Time was when the person in the senior class with the highest grade point average was the valedictorian and the person with the second highest GPA was the salutatorian. In fact, those are the very definitions of those two terms. But no more. My daughter’s class had five—yes, that’s right, five—valedictorians and two salutatorians, in a class of 97 seniors. I am fond of saying that if everyone wins an award winning awards becomes meaningless. When five people are in first place and two people are in second place, in my mind it’s not really very special. I was somewhat surprised to hear the principal say that when he learned there would be five valedictorians what a special thing that was, and how special that particular class was.

Now, it is mathematically possible for two or more students to have the exact same GPA. Not very likely, you understand, but mathematically possible. But five people with the same GPA? I doubt it. And even so, there has to be a better outcome than to have five people named the smartest person in the class. But this is part and parcel of the recent abhorrent trend toward trying to make everyone feel special, even when they aren’t. At the class awards ceremony last week, even people who just participated in a particular activity got an award. I guess those activity sponsors just couldn’t bear not to praise even the mediocre participants. Excellence ain’t what it used to be.

It seems to me that the solution to having two or more people with the same GPA—if indeed that was really the case—is to have some way to break the tie, and the winner takes the valedictorian’s mantle and the second place winner becomes the salutatorian. The rest will just have to be content to rank among the top seven of their class, which is nothing to be ashamed of. Give them a test to see who has the best score. Flip a coin. Draw lots.

Frankly, I think the top five students were close in GPA, say within some number of hundredths of a point. The top student may have had a 4.17, and the second highest had a 4.09. Close? You bet. But one had a better GPA than the other, and that’s the way it should have been determined. (Now, in case you are wondering about how even one student can have more than a 4.00 GPA, it is possible because the Advanced Placement classes are worth more than 4 points for an “A” because of the difficulty of the class.)

School officials couldn’t make the tough decision; that’s the plain and simple truth, and the result is that being valedictorian isn’t as special as it used to be. That and the fact that we are training our young people to expect to be rewarded for less than excellent performance.