Now That's the Way to Run a Jail 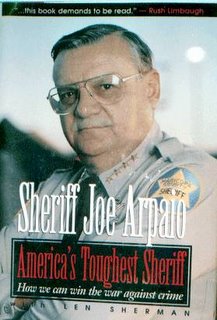 Perhaps you’ve heard about Sheriff Joe Arpaio of Maricopa County, Arizona recently. He’s been on TV, discussing his unique no-nonsense approach to crimes and criminals. Sheriff Joe was first elected in 1992. In 1996, he ran again for sheriff, winning the election with eighty-five percent of the popular vote.

Maricopa County prisoners live in a "tent city” jail, where meals cost 40 cents a serving and the inmates pay for them.

He took away cable TV until he found out there was a federal court order that required cable TV for jails. So he hooked up the cable TV again, but only allowed the Disney Channel and the Weather Channel. When asked why the Weather Channel he replied, "So they will know how hot it's going be while they are working on my chain gangs."

He cut off coffee since it has zero nutritional value. When the inmates complained, he told them, "This isn't the Ritz/Carlton If you don't like it, don't come back." 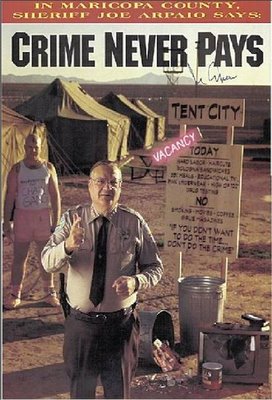 With temperatures being even hotter than usual in Phoenix it is reported that about 2,000 inmates living in the barbed-wire-surrounded tent encampment have been given permission to strip down to their government-issued pink boxer shorts.

Hundreds of men wearing pink boxers were shown on TV either curled up on their bunk beds or chatting in the tents, which reached 138 degrees inside the week before.

Many were also swathed in wet, pink towels as sweat collected on their chests and dripped down to their pink socks. "It feels like we are in a furnace," an inmate who has lived in the tents for 1 year reportedly said. "It's inhumane."

Joe Arpaio, the tough-guy sheriff who created the tent city and long ago started making his prisoners wear pink, and eat bologna sandwiches, is not one bit sympathetic. He is reported to have told all of the inmates: "It's 120 degrees in Iraq and our soldiers are living in tents too, and they have to wear full battle gear, but they didn't commit any crimes, so shut your mouths!"

Sheriff Joe’s approach to running a county jail may or may not cause prisoners to want to stay out of his jail in the future, but I like the idea of running it like a jail and not a hotel.

It is hard to disagree with you on this. Somehow I have managed. Guess I don't want to disappoint.

While a jail should not be a country club there is no reason to make it so spartan. No coffee, no smokes...chain gangs?

Ah, Buff, ol' friend. Good to hear from you. I'm a little surprised by your position. I thought on this one you and I would agree.

People often complain that the U.S. has a huge prison/jail population, as if we put too many peope there. But I think our society coddles folks who break the law, and in doing so we send a tacit message that we're not serious about people following the rules. Then, when we punish those people they live a reasonably comfortable, if restricted, life that gives them 3 squares, a gym to work out in, television, a law library to study up on how to further perplex society, etc,. etc., etc.

All of that costs a fortune, something on the level of $20,000 a year to house a prisoner, someone who has broken the law, someone who has in essence given society the finger. This makes no sense to me, which is why I agree with Arpaio's approach. Make jail unpleasant and people will actively try to avoid going there. And if that doesn't deter them, at least it won't cost an arm and a leg to house them.

Ohhhh, I agree with this guy - shoot, can we make him president, the guy I supported isn't doing so well (although if his opponent had been elected we'd all be speaking french by now).

Buffalo - I believe in the credo, "If you can't do the time, don't do the crime" - Sheriff Joe's jails ain't pretty and they aren't fun to live in; but guess what - they aren't suppose to be.