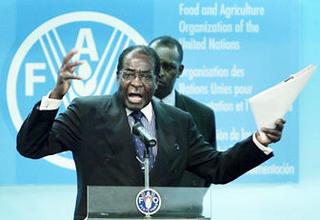 The Washington Times reported that Mr. Mugabe said, "Must we allow these men, the two unholy men of our millennium, who, in the same way as Hitler and Mussolini formed [an] unholy alliance, formed an alliance to attack an innocent country?"

Mr. Mugabe’s leadership is as off the mark as his rhetoric, as 5 million of his 12 million subjects require food aid this year.

This situation is the reverse of the conditions in Zimbabwe only several years ago, when the nation enjoyed an ample food supply. Mr. Mugabe’s forcible redistribution of white-owned farms among blacks helped plunge his country into its worst economic crisis since independence from Britain in 1980. His critics in Zimbabwe and abroad say Mr. Mugabe's land policies have turned what was the breadbasket of southern Africa into a country facing mass shortages at home.

Robert Mugabe is typical of incompetent leaders, who attempt to shift blame from themselves to others. His government has been a target of Amnesty International, which plead with him to end abuses, and he is heavy handed with political opposition. He threw the foreign press out of Zimbabwe, and then attacked the domestic independent press, closing down the Daily News in 2003.

Mr. Mugabe appears to be little more than a thug, and a not very smart one, at that. The world would be a better place if Robert Mugabe would “Please Shut Up!”

Very true indeed - in fact, it appears he is worse than a thug, he is yet another crackpot despot leader that needs deposing.

Ironic that you cite Amnesty, though, as they have had some choice words to say about Bush and Blair as well...

It's good to find another area where we agree.

I don't totally discount what Amnesty does, but I think they overstate the case sometimes. In a case like Zimbabwe, it's difficult to overstate the abuses.

My biggest objection to Amnesty is twofold: First, it opposes the death penalty, and behaves as if it is barbaric, on the same level as murder. That, of course, is not the reality of the death penalty in the U.S., the screw-ups notwithstanding. Second, it is very myopic. For example, in Iraq Amnesty overlooks the fact that 25 million people who not long ago lived under a brutal, oppressive dictator now have the opportunity to build a free society, and focuses only on the negative aspects of the fight for independence.